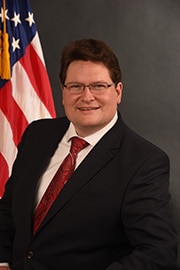 John G. McGough was appointed by the White House in January of 2018 to serve as Regional Director of the U.S. Department of Health & Human Services for Region 1 in New England.  As a Presidential Appointee, Mr. McGough provides executive leadership as the primary representative for the Secretary of Health and Human Services. The office of the Regional Director is tasked with intergovernmental and external affairs bringing together federal, state, local and tribal government organizations, along with other external partners.  In his role, Mr. McGough is responsible for the six New England states of Connecticut, Maine, Massachusetts, New Hampshire, Rhode Island, and Vermont, as well as the Region’s 10 federally recognized Tribes.

Prior to his appointment with HHS, McGough served as Chief of Staff for Maine’s Republican Governor Paul R. LePage for seven years.  During the 2010 gubernatorial campaign, he served as Deputy Chief of Staff and Policy Director.  Prior to joining the campaign, McGough was the Director of Human Resources for the City of South Portland, Maine.  McGough previously served as Assistant City Administrator/Human Resources Officer for the City of Waterville, Maine.  He is also the former Chief of Staff for the House Republican Leader in the Maine House of Representatives.

McGough earned a Bachelor’s and Master’s Degree in Public Administration from the University of Maine system.  He resides in Brunswick, Maine and attends the Pathway Vineyard Church. He has one daughter, Molly, who attends college.