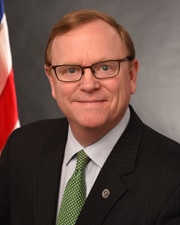 Douglas O’Brien was appointed by the White House in November 2017 to serve as Regional Director of the US Department of Health and Human Services for Region V.  As a Presidential Appointee, Mr. O’Brien provides executive leadership as the primary representative for the Secretary of Health and Human Services. The office of the Regional Director is also tasked with intergovernmental and external affairs bringing together federal, state, local and tribal government organizations, along with other external partners. In his role, Mr. O’Brien is responsible for the six Midwestern states of Ohio, Indiana, Michigan, Illinois, Wisconsin and Minnesota, as well as 34 federally recognized tribes. This is Mr. O’Brien’s second term as Regional Director, having previously served from 2005-2007.

A Chicago-area native, Mr. O’Brien has a long record of experience in public service and the private sector.  He started his career in state government as an aide to the Illinois General Assembly and an administrator in the Illinois Department of Central Management Services and the Department of Revenue.

Mr. O’Brien worked at a global public relations firm, advising clients on advocacy and public policy strategies and served as the Director of Public Relations at a Fortune 500 manufacturing firm.  In 2001, he was appointed Chief of Staff to US Representative Mark Kirk of Illinois, serving until 2004.

During his original tenure at HHS, Mr. O’Brien was part of the team leading the national roll-out of the Medicare Part D drug benefit.  He also worked extensively on pandemic preparation efforts and enhancing the department’s collaboration with state and local public health agencies.

He served as a health and human services policy advisor to Governor Bruce Rauner’s campaign and assisted in forming and served on Gov. Rauner’s transition team.  In 2016 he was appointed by Gov. Rauner to serve as Deputy Director of the Illinois Department of Healthcare and Family Services, which administers the state’s $20 billion Medicaid program.

A graduate of the University of Notre Dame, Mr. O’Brien lives in suburban Chicago with his wife, Kate, a corporate attorney and member of the Illinois State Board of Elections and their twins, Patrick and Madeline.