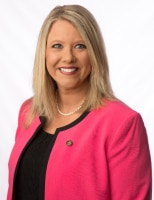 In May 2020, April Weaver was appointed to serve as Regional Director of the U.S. Department of Health and Human Services (HHS) for Region IV.  As a Presidential Appointee, Regional Director Weaver provides executive leadership in Region IV as the primary representative for the Secretary of Health and Human Services. The Office of the Regional Director, based in Atlanta, Georgia, is also tasked with intergovernmental and external affairs, which brings together federal, state, local and tribal government organizations, and private sector businesses. In her role, Regional Director Weaver is responsible for eight Southeastern states, including Alabama, Florida, Georgia, Kentucky, Mississippi, North Carolina, South Carolina, and Tennessee, as well as the Region’s six federally recognized Tribes.

An Alabama native, Regional Director Weaver brings leadership experience in both public service and the private sector to the U.S. Department of Health and Human Services. Prior to her appointment, she served 10 years as an accomplished state legislator in the Alabama House of Representatives, including five years as Chairman of the House Health Committee and as a member of the House Rules, Internal Affairs and State Government Committees. She represented District 49, a district in Central Alabama, which covers parts of Shelby, Bibb and Chilton Counties.

During her tenure in the legislature, she worked in numerous national and state legislative leadership roles, including as National Vice Chair of the Health and Human Services Committee for the National Conference of State Legislatures (NCSL) and as Vice Chair of the Energy Council, a nonprofit legislative organization of 13 energy-producing states and two Canadian provinces. Weaver also brings personal experience with the country’s healthcare system as a Registered Nurse and though 23 years in management roles as a hospital leader in urban, suburban and rural hospitals.

Regional Director Weaver earned her degree in nursing at Shelton State and holds a Bachelors in Business Administration from The University of Alabama and a Master’s in Business Administration from Independence University.  She and her husband, Dr. Darrel Weaver, reside in the Birmingham, Alabama area. They are members of Pelham First Baptist Church in Pelham, Alabama.