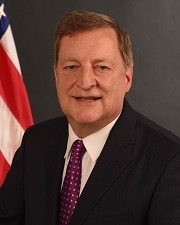 Ed Heidig was appointed by the President on May 15, 2018 as Regional Director for HHS Region IX which serves the people of the states of Arizona, Nevada, California, Hawaii and the U.S. Affiliated Pacific Islands. Ed Heidig is an experienced policy advisor and health care administrator who served as Chief Deputy Director and later Interim Director for the State of California Department of Managed Health Care. The Department is the only stand-alone agency regulating health insurance in the U.S.

Ed Heidig played a key role in adopting timely-access regulations which assured the right care at the right time and proactively reached settlements with health maintenance organizations which expanded autism coverage. He also served on the Managed Risk Medical Insurance Board, which administered the SCHIP program for California. A graduate of Claremont McKenna College and Pepperdine University School of Law, he lives in Sacramento with his wife and has three daughters.