Find infant formula resources for your family during the voluntary recall.

Petitioner, John Tkach, M.D., is a physician, currently practicing in Elko, Nevada, who participated in the Medicare program until August 14, 2015, when the Centers for Medicare & Medicaid Services (CMS) revoked his enrollment, citing 42 C.F.R. § 424.535(a)(12). CMS took this action because the New York State Medicaid agency terminated his Medicaid participation, effective September 24, 2014, and the state agency confirmed that his appeal rights had been exhausted.

I find that CMS appropriately revoked Petitioner Tkach’s Medicare enrollment under section 424.535(a)(12) because the New York State Medicaid agency terminated his Medicaid participation, and he has exhausted his state appeal rights. I therefore affirm CMS’s determination.

Petitioner requested reconsideration. CMS Ex. 8. In a reconsidered determination, dated October 14, 2015, the contractor upheld the revocation. CMS Ex. 9. Petitioner timely appealed and that appeal is now before me.

Thereafter, CMS moved to admit an additional exhibit, CMS Ex. 10. The exhibit includes April 28, 2016 email correspondence from the New York Office of the Medicaid Inspector General to CMS counsel, along with a copy of a U.S. certified mail postal return receipt. The receipt indicates that the state Medicaid agency sent a mailing with tracking number 7013-0600-0001-7591-4840 to Petitioner Tkach at his Elko, Nevada address and that he received and personally signed for the document on September 26, 2014. The tracking number on the receipt corresponds to the number listed in the Medicaid agency’s notice letter. CMS Ex. 1 at 3.

Petitioner objects to my admitting the exhibit. He points out that my order directs the parties to submit, by specific dates, their pre-hearing exchanges and argues that CMS has not shown good cause for failing to submit CMS Ex. 10 with its initial pre-hearing exchange. He claims that, at the time it submitted its proposed exhibits, CMS knew that Petitioner Tkach denied ever receiving notice of his Medicaid termination; yet, according to Petitioner, it “failed to include any evidence to give rise to the rebuttable presumption that the notice was duly mailed or received by Dr. Tkach.” P. Objection at 2.2  In Petitioner’s view, CMS thus loses the right to submit evidence that Petitioner Tkach

received the Medicaid notice and, ultimately, to establish that he had exhausted his rights to appeal the termination.

Putting aside for now Petitioner’s somewhat erroneous underlying premise – that he can remain in the Medicare program so long as he shows that he did not timely receive the state’s notice letter – I find that CMS Ex. 10 is legitimate rebuttal evidence and should be admitted.

With his request for reconsideration and, again, with his hearing request, Petitioner flatly denied ever receiving notice of his Medicaid termination. CMS Ex. 8 at 3; P. Ex. 1 at 3 (“Dr. Tkach did not receive notice of New York State Medicaid’s action revoking his Medicaid privileges.”); Hearing request at 2 (“New York Medicaid did not provide notice to Dr. Tkach regarding its revocation of his Medicaid privileges, as a result of which he could not appeal the New York Medicaid determination.”). With its initial submission, CMS submitted a copy of the state agency’s notice letter, which was sent to Petitioner’s Elko, Nevada address. CMS Ex. 1 at 2-3. This is compelling evidence that the state agency sent the Medicaid termination notice to the appropriate address, and CMS might reasonably have considered that the document, by itself, would resolve the issue. But Petitioner responded with a written declaration in which he no longer flatly denied receiving the notice, but asserted that he did “not recall” receiving the notice and “did not know” that the state agency had taken any action against him. P. Ex. 5 at 2 (Tkach Decl. ¶ 9). He then declared that, had he received the notice, he certainly “would have taken appropriate steps to respond and appeal” the termination. P. Ex. 5 at 2 (Tkach Decl. ¶ 11).

Petitioner submitted his exchange, which included his written declaration, on April 20, 2016. Shortly thereafter (April 28), CMS obtained from the state Medicaid agency a copy of the return receipt. CMS Ex. 10 at 1. The document directly rebuts Petitioner’s written declaration, and, as such, should be admitted.

Witnesses. Although CMS has moved for summary judgment, I find that this matter may be decided on the written record, without considering whether the standards for summary judgment are satisfied. In my initial order, I instructed each party to submit the written direct testimony of any proposed witnesses and to state affirmatively that it wished to

cross-examine an opposing witness. Acknowledgment and Pre-hearing Order at 5 (¶¶ 8, 9) (Feb. 10, 2016). CMS lists no witnesses and provides no written testimony. Petitioner submits his own written declaration, but CMS has not asked to cross-examine him. An in-person hearing would therefore serve no purpose. See Acknowledgment at 5 (¶ 10).

CMS properly revoked Petitioner Tkach’s Medicare enrollment under section 424.535(a)(12) because the New York State Medicaid agency terminated his Medicaid billing privileges, and his rights to appeal that termination have been exhausted.3

Petitioner nevertheless argues that CMS may not revoke his Medicare enrollment because he has not exhausted his state appeal rights. He claims that he did not receive notice of the Medicaid termination and was not advised of his rights to appeal the state’s action. In his view, this means that he has not and apparently cannot exhaust his state appeal rights, which precludes CMS from revoking his Medicare enrollment.

Petitioner’s argument fails for two reasons: First, the evidence conclusively establishes that, on September 26, 2014, he personally received and signed the return receipt for the state’s notice letter: 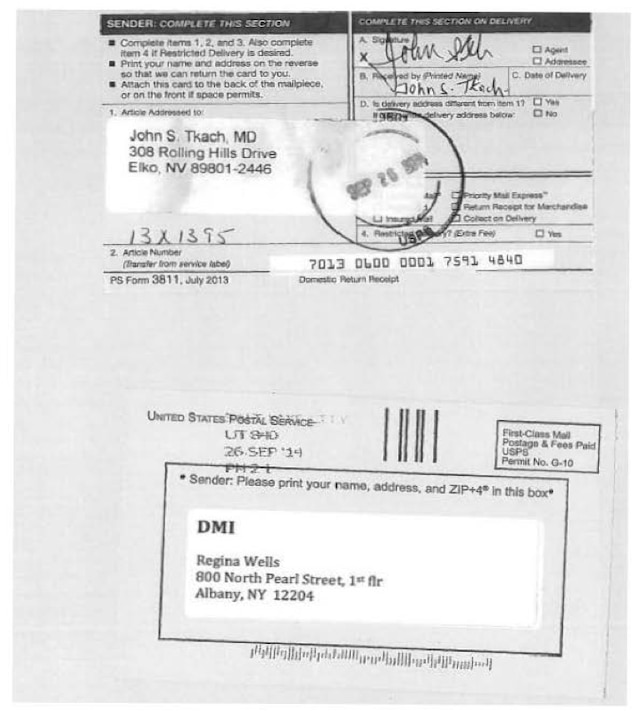 my admitting the return receipt and has complained about CMS’s timing in submitting it, he has not denied that he signed for the document.

Moreover, the premise that underlies Petitioner’s argument is flawed. He supposes that, so long as CMS fails to show that he received the notice directly from the state agency, it cannot establish that he has exhausted his state appeal rights. But Petitioner has plainly known about the Medicaid termination since at least April or May 2015, when the Medicare contractor sent him its first notice letter. CMS Ex. 2; P. Ex. 5 at 2 (Tkach Decl. ¶ 9). And Petitioner admits that he saw the actual state notice letter in March 2016. P. Ex. 5 at 2 (Tkach Decl. ¶ 10). Because, having learned of the termination and received a copy of the notice letter, he made no effort to appeal within 30 days or at all, no appeal rights remain.