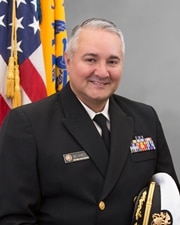 Rear Adm. Michael D. Weahkee, an enrolled member of the Zuni Tribe, is the director of the Indian Health Service, an agency within the U.S. Department of Health and Human Services. The IHS is the principal federal health care advocate and provider of health care services for American Indians and Alaska Natives. As director, Rear Adm. Weahkee administers a nationwide health care delivery program that is responsible for providing preventive, curative, and community health care to approximately 2.6 million American Indians and Alaska Natives in hospitals, clinics, and other settings throughout the United States.

Rear Adm. Weahkee previously served as the chief executive officer for the Phoenix Indian Medical Center, the largest federally-operated facility in the Indian Health Service. He was born in the Shiprock Public Health Service Hospital on the Navajo reservation and grew up as a direct service user of the IHS. Michael began his professional health care career in the United States Air Force, as a public health specialist. After completing his Bachelor of Science degree in Health Care Management from Southern Illinois University-Carbondale, he left the Air Force to pursue advanced hospital administration training, receiving both his Master of Health Services Administration and Master of Business Administration degrees from Arizona State University in Tempe, Arizona.

Rear Adm. Weahkee has also served in a variety of different roles at IHS headquarters, including: executive officer for the Office of Clinical and Preventive Services; director of the Management Policy and Internal Control Staff office; and, as the deputy director for personnel functions in the Office of Management Services, charged with management oversight of human resources, commissioned personnel support and program integrity and ethics for the agency. Rear Adm. Weahkee also served on memorandum of agreement to the California Rural Indian Health Board, both as the director of family and community health services and as deputy director of the health board.