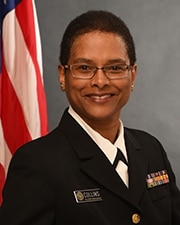 Acting Assistant Secretary for Health
HHS Office of the Secretary

RADM Felicia Collins is the Acting Assistant Secretary for Health, where she manages the development of HHS-wide public policy recommendations and oversees the Department's key public health offices and programs, a number of Presidential and Secretarial advisory committees, 10 regional health offices across the nation, and the Office of the Surgeon General and the U.S. Public Health Service Commissioned Corps with the goal of leading Americans to healthier lives.

Prior to serving as the Acting Assistant Secretary for Health, RADM Collins was serving as the Deputy Assistant Secretary for Minority Health and Director of the Office of Minority Health (OMH) where she leads the office in its mission to improve the health of racial and ethnic minority populations through the development of health policies and programs that help eliminate health disparities. She brings more than 20 years of federal service to this position and a passion for serving vulnerable and underserved communities.

Before joining OASH in 2018, RADM Collins served a Senior Advisor in the Health Resources and Services Administration (HRSA), Bureau of Primary Health Care (BPHC). In this role, she co-led programmatic monitoring and oversight of more than 700 Federally Qualified Health Centers (FQHCs) receiving $2 billion in grants to provide healthcare services to more than 14 million vulnerable and underserved patients annually in 30 states and two U.S. territories. Prior to this role, RADM Collins served at the Food and Drug Administration, where she supported the development of safe and effective drugs for children in the U.S., consistent with the Pediatric Research Equity Act and Best Pharmaceuticals for Children Act. RADM Collins has received numerous awards and commendations from the USPHS Commissioned Corps, the Secretary of Health and Human Services (HHS), and the Secretary of the Navy.

RADM Collins' professional experience also includes prior service as a legislative aide for the Congressional Caucus for Women's Issues in the U.S. House of Representatives and as an Assistant Professor of Pediatrics at the Uniformed Services University of the Health Sciences.

RADM Collins received her undergraduate degree from Yale and her medical degree from Harvard Medical School. She completed a residency in primary care pediatrics at Children's Hospital in Boston, Massachusetts and received her M.P.H. from the Harvard School of Public Health as a Commonwealth Fund Fellow in Minority Health Policy.