Home > About > Leadership > Christi A. Grimm 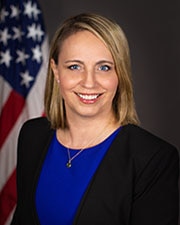 In January 2020, Christi Grimm became the Principal Deputy Inspector General of the Department of Health and Human Services (HHS), Office of Inspector General (OIG).  As Principal Deputy Inspector General, she leads an independent and objective organization of more than 1,600 auditors, evaluators, investigators, lawyers, and management professionals who carry out OIG’s mission of protecting the integrity of HHS programs as well as the health and welfare of program beneficiaries.  Ms. Grimm is responsible for the oversight of more than 100 programs administered by HHS agencies such as the Centers for Medicare & Medicaid Services (CMS), Administration for Children and Families, Centers for Disease Control and Prevention, Food and Drug Administration, and National Institutes of Health.

Ms. Grimm brings two decades of leadership and expertise in health and human services programs.  She is a leading expert in program integrity issues related to HHS programs, with particular emphasis on health care services provided in home and community-based settings.  Ms. Grimm serves as an executive liaison by engaging with Government partners, national professional associations, and the private sector, and she frequently represents OIG as a speaker at educational programs and before Congress and the media.

From 2014 to 2019, Ms. Grimm was the Chief of Staff and Deputy Inspector General for the Immediate Office.  She directed OIG’s strategic planning, was responsible for effective execution of OIG’s priorities, and advised on a wide variety of policy and operational matters.  As Chief of Staff, Ms. Grimm created and chaired OIG’s Engagement Committee, a senior executive forum that deliberates on OIG investments.  Prior to becoming OIG’s Chief of Staff in 2014, Ms. Grimm served in leadership roles in the Immediate Office, including Director of Policy and Programs and Senior Advisor for Program Oversight.  Ms. Grimm began her career with OIG in 1999 as a Program Evaluator and later served as a Senior Program Analyst in OIG’s Office of Evaluation and Inspections.  She designed and conducted groundbreaking work to improve quality and safety in hospitals, stop unqualified providers from enrolling in Medicaid, and improve the process for appealing Medicare payment decisions.

Ms. Grimm previously worked at CMS, conducting national assessments of contractor performance.  Ms. Grimm holds a Master of Public Administration from New York University and a Bachelor of Arts from the University of Colorado, Denver.  She is also a graduate of Harvard University’s Kennedy School of Senior Managers in Government.  Ms. Grimm has received the Secretary’s Award for Excellence in Management and the Council of the Inspectors General on Integrity and Efficiency Award for Excellence in Management.