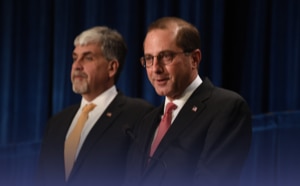 In 2018, HHS took major steps forward in departmental management, from reforms of the regulatory burdens it places on healthcare and human services partners to developing new tools for improving departmental management. As the single largest cabinet agency by spending, representing more than one-third of the total federal budget, HHS also maintained its reputation for excellence in budgetary management and enhanced its financial practices. HHS was ranked as the second best large federal agency – and the best cabinet department – to work at for the second straight year. 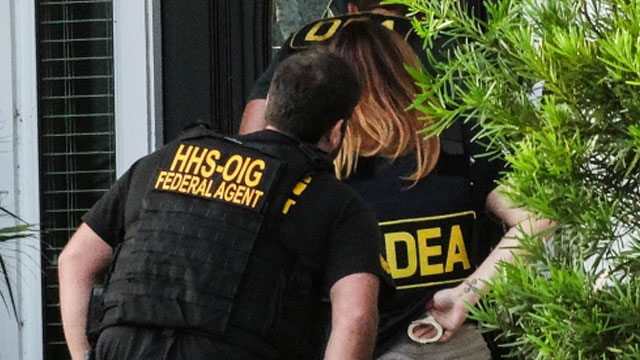 Records set by OIG: HHS’s Office of the Inspector General participated in the largest national Healthcare Fraud Takedown Day in history, charging over 600 individuals with participating in fraud schemes involving about $2 billion in losses to Medicare and Medicaid. Since the last takedown, OIG also issued exclusion notices to 587 doctors, nurses, and other providers based on conduct related to opioid diversion and abuse. In the 2018 takedown, 162 defendants, including 76 doctors, were charged for their roles in prescribing and distributing opioids and other dangerous drugs.

As one example of a particularly large fraud, an owner of a Florida pharmacy was sentenced to 15 years in prison and ordered to pay $54.5 million for a prescription drug fraud scheme. The owner operated multiple pharmacies, which he used to pay kickbacks and bribes in exchange for prescriptions and submitted false claims for prescription compounded medications to private insurance companies, Medicare, and Tricare.

HHS was the No. 1 Cabinet agency in terms of deregulatory impact for Fiscal Year 2018. This work was coordinated across the department by the Deputy Secretary’s office and HHS’s Regulatory Reform Task Force, and aligned with the Office of Management and Budget’s Unified Agenda by HHS’s Executive Secretariat.

Improving processes and flexibility for state healthcare programs: From 2016 through the first quarter of 2018, CMS cut the median approval time for a state plan amendment by 23 percent, while approval times for waivers for long-term care- and home-and-community-based-services dropped as well. CMS also issued a proposed rule that will help streamline regulation of states’ use of managed care for Medicaid and CHIP, and published a letter to state Medicaid directors explaining its current approach to calculating budget neutrality for 1115 demonstrations, to address concerns raised by some states.

Lessening clinician burden: At CMS alone, regulatory reform measures will generate $5.2 billion in savings from 2018 to 2021, saving clinicians more than 53 million hours of paperwork and eliminating 105 different clinical measures because they were unhelpful or no longer meaningful.

Streamlining compliance for health centers: HRSA issued the Health Center Program Compliance Manual, centralizing compliance guidance into a single resource that reduced the number of the pages in the compliance guide by more than 50 percent, resulting in GAO closing a 2012 recommendation.

A department-wide effort to advance HHS operations launched in 2017, ReImagine HHS saw initiatives formally launched and a number of results begin to materialize in 2018.

Advancing acquisitions through ‘Buy Smarter’ initiative: Utilizing Blockchain technology, artificial intelligence, and machine learning, the ReImagine HHS acquisitions-reform initiative, “Buy Smarter” developed a secure, immutable automated data layer to provide the HHS workforce with real-time, agency-wide data for effective decision making throughout the acquisition process. Buy Smarter has trained HHS personnel in more agile approaches to acquisitions, improved the interaction with industry partners at both transactional and strategic levels, and significantly lessened the administrative and financial burden on small businesses. Buy Smarter has identified opportunities to achieve over $720 million a year in savings on HHS-wide goods and services once fully implemented. For this work, the initiative won two noteworthy awards at the 2018 Government Innovation Awards, which showcases the best examples of discovery and innovation in government IT.

Improving employee engagement and management: ReImagine HHS’s “Maximize Talent” initiative to improve human resource practices helped HHS retain its spot as the No. 2 best large agency to work at in the federal government in 2018. Maximize Talent has been implementing four distinct projects to transform the HHS workplace experience at all stages of the employee lifecycle. 1) A reform of the enterprise-wide hiring processes to increase collaboration across the HHS Human Resources Centers; 2) an employee engagement initiative that established tools and processes for managers to use to routinely measure and implement activities to improve overall employee engagement; 3) an initiative to transform HHS’ performance management culture, which included a proposal for a new HHS Performance Management Policy and Performance Plan; and 4) a reform of the HHS-wide human resources IT infrastructure.

Recognitions of accounting performance: In 2018, HHS received, for the fifth consecutive year, the prestigious Association of Government Accountants’ “Certificate of Excellence in Accountability Reporting,” the highest award available for federal government financial reporting. HHS also received an unmodified or “clean” audit opinion, from the independent audit of the department’s annual financial statements. In total, ASFR’s Office of Finance presented annual spending for over 300 programs in HHS’ audited financial statements and maintained highly complex accounting structures and standard business processes to account for over $1.7 trillion in budgetary resources.

Improvements in grants processes: ASFR’s Office of Grants and Acquisition Policy and Accountability (OGAPA) continued to improve the experience for applicants and grantors through Grants.gov. The site posted 5,798 funding opportunities and processed over 227,160 applications through the Grants.gov system, running 100 percent operational with no unscheduled outages. In April 2018, OGAPA successfully launched the Grants.gov Mobile App, providing applicants with new notification tools and convenient access to search, view, and share federal funding opportunities on the go. OGAPA also implemented other process enhancements that support more robust reuse of data from previous applications, reduce the burden on applicants during the application process, and allow streamlined account creation and logins.

Specific HHS divisions also endeavored to simplify grants applications, with SAMHSA significantly streamlining its application review process by reducing the application length from 25 to 10 pages and reducing the number of questions to which applicants had to respond from over 25 to 9.

New progress on the Medicare appeals backlog: The Office of Medicare Hearings and Appeals (OMHA) removed more than 224,000 appeals from its appeals backlog in fiscal year 2018, bringing the total number of pending appeals down to 417,198 at the end of the fiscal year. Progress resulted from both traditional hearing and adjudication by administrative law judges as well as special initiatives including innovative solutions such as the use of alternative dispute resolution techniques through OMHA’s settlement conference facilitation program. After receiving a 70 percent increase in funding over FY 2017 levels for FY 2018, continued through FY 2019, OMHA also began the staffing and geographic expansions necessary to address its current appeals backlog and position the agency to timely address future appeals.

Digitizing departmental processes: The Departmental Appeals Board launched a project to digitize all remaining paper files in its Medicare Operations Division, which will transform the case processing of Medicare appeals into a completely paperless process.

OMHA achieved a significant milestone in its multi-year Electronic Case Adjudication and Processing Environment initiative, beginning an incremental rollout to a limited number of teams of administrative law judges beginning in early December. In 2018, over 1,000 appeals were also filed through a new pilot electronic portal for appeals, a 216 percent increase from 2017.

Maximizing the Promise of Data

Scorecards for top departmental priorities: ASPE began creating monthly measurements of progress under the Trump administration toward the expansion of MAT and naloxone prescribing, as well as reductions in the volume of opioids prescribed. ASPE also enhanced its data and modeling capacity to track a broad range of spending trends in brand, generic, biologic, and specialty drug markets, including tracking list price increases in near real time. With these metrics, the entire department, from leadership on down, can gain the earliest possible sense of where policy changes may be having an effect.

Achieving universal participation in reporting on elder abuse: In 2018, for the first time, all 50 states contributed data to the ACL’s voluntary National Adult Maltreatment Reporting System, which collects data on elder abuse and abuse of people with disabilities as reported to adult protective services, and also the volume, response, and, eventually, outcomes of adult protective services work. Lack of data for research and best practice development has been cited by numerous entities, including the Government Accountability Office, as a significant barrier to fighting elder abuse.

Promoting interoperability in human services: ACF established an interoperability action plan to expand data sharing initiatives within ACF and beyond. ACF’s Office of Planning, Research, and Evaluation has convened a community of interest to facilitate implementation of the plan across ACF programs.

Improving assessments of outcomes for refugees: ACF’s Office of Refugee Resettlement (ORR) expanded the data collected from state and state-alternative agencies, focusing on enrollment and outcomes. ORR expanded this data collection as one of the many efforts to enhance data collection to better understand program outcomes, service utilization and the continuum of services post arrival.

Boosting next-generation researchers: As a result of the NIH Next Generation Researchers’ Initiative, in 2018, NIH funded far more early career investigators than at any time in NIH history

Leveraging the cloud: In 2018, NIH launched the NIH STRIDES—Science and Technology Research Infrastructure for Discovery, Experimentation, and Sustainability—Initiative to use commercial cloud computing to provide NIH researchers access to the most advanced, cost-effective computational infrastructure, tools, and services available. NIH has partnered with Google Cloud and Amazon Web Services to reduce economic and technological barriers to accessing and computing on large biomedical data sets.

Mapping human biology: NIH launched the Human Biomolecular Atlas Program (HuBMAP) to develop an open, global framework that will support research community efforts to map the adult human body at the level of individual cells. The new round of funding launched in 2018 totals $54 million over the next four years.

Protecting the Security of the United States Biomedical Research Enterprise

Increasing role for HHS in protecting national security: In 2018, through the Office of Security and Strategic Information, HHS played a significantly increased role in cases overseen by the Committee for Foreign Investment in the United States (CFIUS), which reviews the national security implications of foreign investments in U.S. companies. In FY 2018, 14 new CFIUS cases involving HHS were opened, with 11 cases closed, while in FY 2019, four new cases have been opened already and six have been closed.