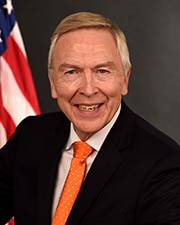 Assistant Secretary for Administration (ASA)
HHS Office of the Secretary

Scott W. Rowell was sworn in as the Assistant Secretary for Administration of the Department of Health and Human Services on August 20, 2018. Rowell is responsible for human resources policy, equal employment opportunity, diversity, facilities management, information technology and the Department’s service operations.

Rowell is a 25 year Army veteran. His Army career included assignments as a long range planner in the Office of Net Assessment at the Pentagon and as an assistant professor in the Department of Social Sciences, United States Military Academy, at West Point. In 1998, he retired from active military service with the rank of colonel.

As a civilian, he was selected as the Deputy Assistant Secretary for Strategy, Plans and Resources in the Office of Homeland Defense at the Pentagon. He was responsible for the development of homeland defense policy and strategic guidance and policy integration; and the oversight of the Department of Defense (DoD) homeland defense policies, programs, and budgets within DoD components.

In 2008, Rowell returned to government service at the request of the Deputy Undersecretary of the Army as a senior advisor to the U.S. Army’s Manpower and Reserve Affairs Office at the Pentagon. There, he was charged with developing programs focused on educating and training the Army Civilian Corps.

Rowell is a distinguished graduate from Arkansas State University with a Bachelor of Arts degree in history; he also has a Master of Arts in International Affairs from American University and a Master of Science in National Resource Strategy from the National Defense University.

Rowell and his wife reside in Potomac Falls, Virginia and are the proud parents of three grown children and six grandchildren.