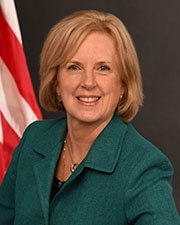 Lynn Johnson is the assistant secretary at HHS’s Administration for Children and Families. She was confirmed by the U.S. Senate on August 28, 2018.

Before joining the Trump administration, Mrs. Johnson served as the executive director of Jefferson County Human Services in Colorado, overseeing the county’s Head Start program, as well as programs on the workforce, career and family services, child welfare, justice services and community assistance.

She was the chief of staff to Colorado Lt. Gov. Jane E. Norton in 2003, and from 1999 to 2002 was a policy advisor to Colorado Governor Bill Owens. Before joining the Owens administration, Mrs. Johnson served as a senior specialist with the United States Courts as a probation and parole officer. She was responsible for direct supervision of offenders with mental health problems and offenders convicted of sex offenses.

Mrs. Johnson has a bachelor’s degree in rehabilitation from the University of Northern Colorado and a master’s degree in social work from Arizona State University. She is a graduate of the Federal Judicial Center National Leadership Development Program and Harvard Executive Education for State and Local Governments.  Mrs. Johnson has been happily married for 32 years and is the mother of three adult children.