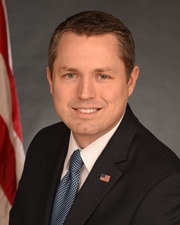 Chief of Staff
HHS Office of the Secretary

Brian Harrison is the Chief of Staff at the U.S. Department of Health and Human Services (HHS), a position he has held since June 2019.  Immediately prior to this role, he served as the Deputy Chief of Staff, beginning when he rejoined the Department with Secretary Alex Azar in January 2018.  He also worked in the office of the Deputy Secretary at HHS during the administration of President George W. Bush.

In addition to his multiple roles at HHS, Mr. Harrison has held both political and career positions at various other federal agencies spanning three presidential administrations.  These include working on sensitive intelligence issues at the Department of Defense, managing complex domestic and worldwide operations in the office of the Vice President at the White House, and serving in the office of the Commissioner at the Social Security Administration.

After completing his first tour of government service, Mr. Harrison worked as a director at a public affairs firm, helping oversee their healthcare portfolio.  He then returned to his home in Texas where he was a consultant for multiple clients, including a healthcare-focused public affairs firm as well as a presidential campaign.  Before being recruited back to government to serve in the Trump Administration, he owned and operated a small, family business in Texas.

Mr. Harrison holds a Bachelor of Science degree from Texas A&M University, where he studied economics, business administration, and political science.  He lives in Arlington, Va., with his wife and their four children.