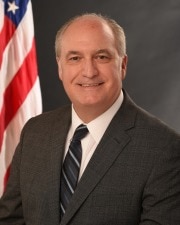 Garrett Grigsby has served as Director of the Office of Global Affairs since May 2017. Garrett served on the staff of the U.S. Senate Committee on Foreign Relations (SFRC) throughout the 1990s. As SFRC Deputy Staff Director he was responsible for oversight of all U.S. Government foreign assistance programs, including global health initiatives.

Garrett joined the U.S. Agency for International Development (USAID) in 2002 as Deputy Assistant Administrator for the Bureau for Democracy, Conflict, and Humanitarian Assistance where he oversaw global disaster relief and humanitarian programs. In 2005, he was appointed Director of USAID’s Center of Faith-Based and Community Initiatives. From 2006-2014, Garrett consulted for U.S. non-profits helping to expand their global health work and strengthen relationships with the federal government. From 2014 until joining HHS Garrett served as Executive Director of Christian Connections for International Health, an association of non-profits focused on promoting global health and wholeness. 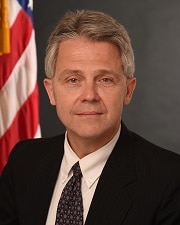 Thomas Bryant Alexander has served as the Principal Deputy Director of Global Affairs in the Office of the Secretary at the US Department of Health and Human Services since February 2017.

On the Presidential Transition team, he served as Deputy Sherpa on the nominations of Thomas Price, MD, to be Secretary of HHS, and Seema Verma, MPH, to be Administrator of CMS. Prior to this he was Legislative Director and LA for Health Policy for US Senator Jon Kyl (R-AZ), and Chief of Staff of the Employee Benefits Security Administration at the US Department of Labor. He served as Consular Assistant at the US Embassy in Kiev, Ukraine and received the Benjamin Franklin Award from Ambassador John Tefft. He served as an EFM appointee at the US Embassy in Lilongwe, Malawi, and served in the US House of Representatives on the staffs of US Representative Jim McCrery (R-La), US Representative Frank Wolf (R-Va), and US Representative Barbara Comstock (R-Va.) He served in the Reagan White House and was Honorably Discharged from Platoon Leader’s Class and the Marine Corps Reserves at Marine Corps Base Quantico. He graduated Summa Cum Laude from Cardinal Newman College; and from the University of Missouri-Kansas City School of Law where he served on the Honor Court. In law school, he was selected for a clerkship in the Criminal Division of the Missouri Attorney General, and for an academic clerkship in the chambers of Judge Pasco M. Bowman, 8th US Circuit Court of Appeals. He served as an Assistant City Attorney for Kansas City, Missouri, and received the Volunteer Attorney Project Award from the Missouri Bar Association. He was admitted to the practice of law before the Supreme Court of Missouri and the Court of Appeals of Washington, DC.

Colin McIff currently serves as the Deputy Director of the Office of Global Affairs at the U.S. Department of Health and Human Services.  Prior to this, Mr. McIff served from 2016-2018 as the Director of the Europe Office of the Food and Drug Administration (FDA) and HHS Representative to the European Union in Brussels, Belgium.  From September 2010 to August 2016, Mr. McIff served as Health Attaché at the U.S. Mission to the United Nations in Geneva, leading U.S. engagement with the World Health Organization and other Geneva-based health institutions.  From April 2010 to August 2010, Mr. McIff was the Acting Director for Multilateral Affairs at the Office of Global Affairs at the U.S. Department of Health and Human Services, leading U.S. negotiations on the Code of Practice on the International Recruitment of Health Personnel.  From November 2004 to April 2010, Mr. McIff served as Multilateral Organizations Officer for the President’s Emergency Plan for AIDS Relief (PEPFAR) at the Office of the U.S. Global AIDS Coordinator.  While with PEPFAR, Mr. McIff led coordination efforts with multilateral organization partners such as the Joint UN Program on HIV/AIDS (UNAIDS), UN Office of Drugs and Crime, and UN Children’s Fund (UNICEF).  Prior to joining PEPFAR, Mr. McIff served with the Bureau of Oceans, International Environmental and Scientific Affairs and the Office of Japan Affairs at the U.S. Department of State and with the U.S. Agency for International Development.  Mr. McIff received his Bachelor of Arts in History and East Asian Studies from the University of Arizona in 1994 and his Master of Pacific International Affairs from the University of California San Diego in 1998.