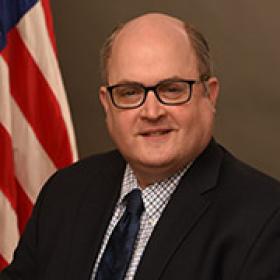 Colin McIff currently serves as the Deputy Director of the Office of Global Affairs at the U.S. Department of Health and Human Services.

Prior to this, Mr. McIff served from 2016-2018 as the Director of the Europe Office of the Food and Drug Administration (FDA) and HHS Representative to the European Union in Brussels, Belgium. From September 2010 to August 2016, Mr. McIff served as Health Attaché at the U.S. Mission to the United Nations in Geneva, leading U.S. engagement with the World Health Organization and other Geneva-based health institutions.

From November 2004 to April 2010, Mr. McIff served as Multilateral Organizations Officer for the President’s Emergency Plan for AIDS Relief (PEPFAR) at the Office of the U.S. Global AIDS Coordinator. While with PEPFAR, Mr. McIff led coordination efforts with multilateral organization partners such as the Joint UN Program on HIV/AIDS (UNAIDS), UN Office of Drugs and Crime, and UN Children’s Fund (UNICEF).

Prior to joining PEPFAR, Mr. McIff served with the Bureau of Oceans, International Environmental and Scientific Affairs and the Office of Japan Affairs at the U.S. Department of State and with the U.S. Agency for International Development.