HHS is proud to be home not just to many of the world’s preeminent individual scientists, public health experts, and clinicians, but also the world’s finest scientific institutions: the largest single source of biomedical research funding in the world in NIH, the world’s premier epidemiological institution in CDC, and the world’s gold-standard food and drug safety agency in FDA.

In 2018, work continued to maximize the impact these institutions have on improving the health and well-being of Americans and the entire world, while various efforts were undertaken to improve the underlying infrastructure of our research, approval, and public health work.

Speeding innovation for military medical needs: In 2018, FDA established a framework for enhanced collaboration with the Department of Defense (DoD) to expedite the FDA’s review of products to diagnose, treat, or prevent serious or life-threatening diseases or conditions facing American military personnel. In support of this partnership, FDA:

FDA and WHO working together to expedite review of HIV treatments: FDA announced a plan to work with the World Health Organization (WHO) to pilot a process to share documents on HIV drug applications that have been approved or tentatively approved by the agency under the U.S. President’s Emergency Plan for AIDS Relief. In this initial pilot, the FDA will, with the applicants’ permission, provide the WHO with minimally-redacted reviews of one or two HIV drug applications, which can then be used to produce review dossiers to be shared with regulators in resource limited countries to speed up their own regulatory review processes.

Working toward international regulatory harmonization: FDA expanded the United States’ ability to use drug inspections conducted by competent European authorities by completing capability assessments for 15 European Union (EU) regulatory authorities, which are now recognized as capable authorities under the Mutual Recognition Agreement between the FDA and EU that went into effect in November 2017. FDA also promoted future access to safe, effective and affordable generic drugs by securing the International Council on Harmonization’s endorsement of FDA’s proposal for future harmonization of scientific and technical standards for generic drugs.

Paving the way for a digital-health future: FDA made significant strides toward implementing its Digital Health Innovation Plan, which is focused on fostering innovation at the intersection of medicine and digital health technology. For instance, FDA issued three significant draft guidances to implement the 21st Century Cures Act, including clarifying the regulatory status of products that contain some functions fall outside the scope of FDA regulation, but others that do not.

Advancing science in outer space: On HHS’s behalf, Deputy Secretary Hargan signed an interagency agreement with NASA, covering cooperation on scientific research that would benefit humanity on Earth and on individuals traveling to the Moon and beyond. NASA and various HHS agencies have mutual interests in exploring autonomous portable medical capabilities for remote locations and field medical care, long shelf life and manufacturing of pharmaceuticals, and improved tools to deal with isolation and confinement. The National Institutes of Health already had its own agreement with NASA, but this new interagency agreement is an umbrella arrangement designed to cover the entire Department of Health and Human Services.

Building real-world evidence through partnerships: In collaboration with FDA, the National Evaluation System for health Technology (NEST) Coordinating Center established agreements with twelve data partners representing over 195 hospitals, nearly 4,000 clinics and over 495 million patient records. Soon, NEST will launch pilot programs testing the use of medical records, patient registries and claims data to evaluate the safety and effectiveness of devices in many clinical areas and throughout the medical device total product life cycle. Both FDA and CMS serve on the NEST Governing Committee, as improved data collection through NEST can also help establish the evidence needed for CMS national coverage determinations.

Launching the All of Us research program: In May 2018, NIH launched the All of Us Research Program, an effort to engage 1 million U.S. research volunteers to build a national resource that accelerates health research and individualized healthcare. To date, over 150,000 individuals initiated sign up to join the program, with over 64,000 of these individuals already contributing data as participants. The size of the program will enable researchers to derive insights especially for populations that are traditionally underrepresented in biomedical research. 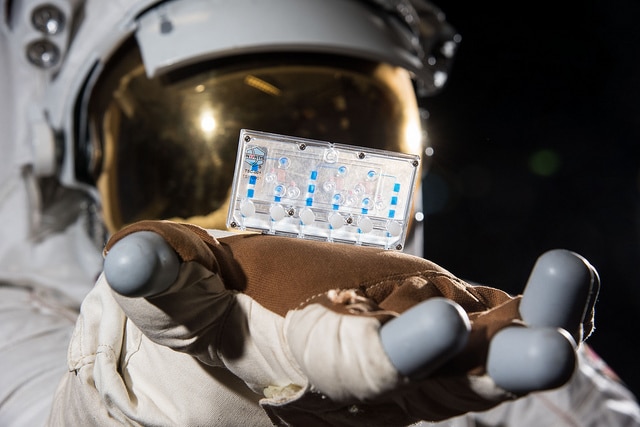 A NASA spacesuit is shown with a kidney tissue chip in hand, part of a partnership between the NIH’s National Center for Advancing Translational Sciences (NCATS) and the ISS National Lab. Photo: NASA

Making Strides in the War on Cancer

NIH and VA collaborate to boost veterans’ access to cancer clinical trials: Veterans with cancer who receive treatment from the VA will now have easier access to clinical trials of novel cancer treatments, thanks to an agreement between VA and the National Cancer Institute (NCI). The NCI and VA Interagency Group to Accelerate Trials Enrollment, or NAVIGATE, which is launching at 12 VA facilities across the country, will enhance the ability of veterans to participate in trials carried out through NCI’s National Clinical Trials Network (NCTN) and the NCI Community Oncology Research Program.

Advancing the Beau Biden Cancer Moonshot: The $300 million appropriated for the Beau Biden Cancer Moonshot in FY 2018 has been invested in research focused on speeding progress against cancer in children and adults though advances in immunotherapy and the understanding of drug resistance. The moonshot efforts were enhanced by the FY 2018 launch of NIH’s Partnership for Accelerating Cancer Therapies, a five-year public-private collaboration between NIH and 12 biopharmaceutical companies to develop biomarkers to advance cancer immunotherapy.

A major initiative on drivers of cancer in black men: NIH and the Prostate Cancer Foundation launched a large study on aggressive prostate cancer in black men, the largest coordinated research effort to study biological and non-biological factors associated with this issue. The $26.5 million study, called RESPOND, or Research on Prostate Cancer in Men of African Ancestry: Defining the Roles of Genetics, Tumor Markers, and Social Stress, will investigate environmental and genetic factors related to the aggressiveness of prostate cancer in African-American men to better understand why they disproportionally experience aggressive forms of the disease compared with men of other racial and ethnic groups.

New discoveries expanding our understanding of cancer: Scientific discoveries in 2018 around cancer that were supported by NIH funding include:

To support the growth of this field, FDA issued numerous draft and final guidance documents addressing topics such as risk-based compliance and enforcement priorities regarding the premarket approval requirements for human cell and tissue-based products, as well as expedited programs for regenerative medicine therapies for serious conditions. At NIH, therapeutic strategies supported by $10 million FY 2018 funding include cell delivery for restoring the structure and function of damaged cells and tissues and enhancing the body’s own innate healing capacity.

Specific goals for NIH contributions to the initiative were formulated in “BRAIN 2025: A Scientific Vision,” a 12-year roadmap. NIH used the $86 million in FY 2018 that was authorized by the 21st Century Cures Act to support, among other initiatives, the BRAIN Initiative Cell Census Network, to catalog brain cell types across species, and an interdisciplinary and integrative BRAIN Circuit Programs to link neural circuit activity to behavior. Continuing to build on early research successes, NIH also announced more than 200 new BRAIN awards totaling over $220 million.

Researching the progression of Parkinson’s: As part of the Accelerating Medicines Partnership (AMP), NIH and partners launched AMP Parkinson’s Disease, to focus on identifying and validating promising markers of the disease to track progression and eventually develop biological targets for discovery of new drugs.

Seeking a better understanding of Down Syndrome: NIH launched the INCLUDE (Investigation of Co-Occurring Conditions Across the Lifespan to Understand Down Syndrome) project, dedicating $22.2 million in additional funding to raise NIH’s total Down Syndrome research funding to approximately $59 million for FY 2018.

Scientists from the Centers for Disease Control and Prevention investigate, monitor, and control sickness, disability, and death caused by highly lethal viral, bacterial, prion, and related infections and diseases of unknown origin.