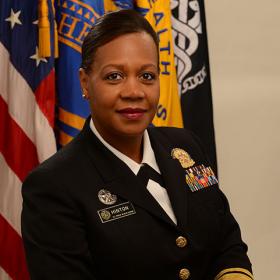 As Deputy Surgeon General, Rear Admiral (RADM) Denise Hinton advises and supports the U.S. Surgeon General regarding operations of the U.S. Public Health Service (USPHS) Commissioned Corps and in communicating the best available scientific information to advance the health of the nation.

Before becoming Chief Scientist, RADM Hinton held various leadership positions within the FDA, including Deputy Director of the Office of Medical Policy (OMP) in FDA’s Center for Drug Evaluation and Research (CDER), where she concurrently served as Acting OMP Director from 2014 to 2016.  There, she led the development, coordination, and implementation of medical policy programs and strategic initiatives, including the efficient integration of rapidly evolving science and new technologies into the drug development and regulatory review processes.  RADM Hinton’s work involved close collaboration with other CDER program areas, FDA product centers, and a broad variety of stakeholders, including industry and academia. RADM Hinton joined FDA in 2002 in CDER’s Division of Cardiovascular and Renal Products and, later, served in the center’s former Division of Training and Development.

Prior to joining the USPHS Commissioned Corps, RADM Hinton served in the U.S. Air Force as a nurse officer.  She earned her Bachelor of Science in Nursing from Florida State University and her Master of Science from Boston University. RADM Hinton is a Fellow of the American Academy of Nursing.

RADM Hinton received numerous awards for her contributions to science and public health including, a USPHS Meritorious Service Medal. She is the recipient of the Department of Health and Human Services Award for Excellence in Management for making significant and enduring contributions to FDA’s response to the COVID-19 pandemic. She also earned an FDA Commissioner’s Special Citation, one of the highest honors bestowed by the FDA. Additionally, RADM Hinton was recognized by the Maryland Governor with a Governor’s Citation for efforts in combatting the opioid epidemic.