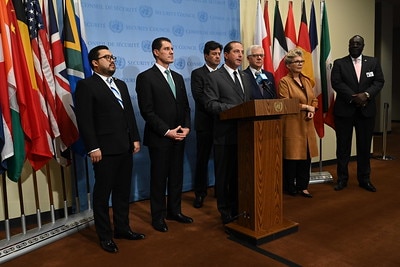 On Monday September 23 2019, before the opening of the high level meeting on Universal Health Coverage (UHC), Secretary Alex Azar gathered with representatives from four of the six World Health Organization global regions to introduce and read the initial version of the joint statement on behalf of 19 countries representing more than 1.3 billion people. The statement called on the UN and its agencies to focus on efforts that enjoy broad consensus and accelerate progress to health rather than on issues that undermine the critical role of the family or that promote practices and programs that do not enjoy International consensus. Before the conclusion of the UHC high level meeting, two more countries joined the statement, bringing the total to 21 nations. You may read the 21-country version of the joint statement below.

We believe that health of women, men, children and adolescents supports and improves the overall health of our families and communities, and that the family is the foundational institution of society and thus should be supported and strengthened.

We commend the United Nations and the Member States on the significant work done on the Universal Health Coverage Political Declaration, and for the high priority placed on expanding access to health care.

We therefore urge Member States to join us in focusing on the important work of expanding health and opportunities for all people, and especially those in situations of risk and/or vulnerability.

To make the most meaningful progress without delay or dissension, we respectfully call upon Member States to join us in concentrating on topics that unite rather than divide on the critical issues surrounding access to health care.

We do not support references to ambiguous terms and expressions, such as sexual and reproductive health and rights in U.N. documents, because they can undermine the critical role of the family and promote practices, like abortion, in circumstances that do not enjoy international consensus and which can be misinterpreted by U.N. agencies.

Such terms do not adequately take into account the key role of the family in health and education, nor the sovereign right of nations to implement health policies according to their national context. There is no international right to an abortion and these terms should not be used to promote pro-abortion policies and measures. Further, we only support sex education that appreciates the protective role of the family in this education and does not condone harmful sexual risks for young people.

We therefore request that the U.N., including U.N. agencies, focus on concrete efforts that enjoy broad consensus among member states. To that end, only documents that have been adopted by all Member States should be cited in U.N. resolutions.

To this end, we also understand the important role the Sustainable Development Goals play in assisting countries realize their own path to universal health coverage, in accordance with national policies and legislation.

We strongly support the highest attainable health outcomes for women, men, children, and adolescents holistically and throughout their lives.

We support equal access to health care, which includes, but is not limited to reproductive concerns, maternal health, voluntary and informed family planning, HIV, elimination of violence against women and girls, and empowerment to reach the highest standard of health.

We support programs to improve the health, life, dignity, and well-being of women, men, children, and families, and we will continue to be their stalwart defender.

Let us focus on concrete issues and challenges to accelerate access to health for all.

To this end, international solidarity has a key role to play, in order to the build broad consensus by member states."