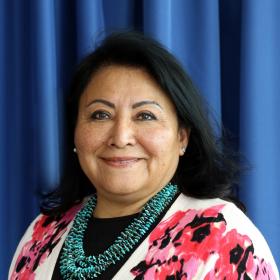 Roselyn Tso, an enrolled member of the Navajo Nation, is the director of the Indian Health Service, an agency within the U.S. Department of Health and Human Services. The IHS is the principal federal health care advocate and provider of health care services for American Indians and Alaska Natives.

As director, Ms. Tso administers a nationwide health care delivery program that is responsible for providing preventive, curative, and community health care to approximately 2.7 million American Indians and Alaska Natives in hospitals, clinics, and other settings throughout the United States. She previously served as the director of the IHS Navajo Area since 2019, where she was responsible for providing leadership in the administration of a comprehensive federal, tribal, and urban Indian health care system for over 244,000 American Indians and Alaska Natives throughout Arizona, New Mexico, and Utah.

Ms. Tso began her career with the IHS in 1984. She has served in various roles in the IHS Portland Area, both at the service unit level as the administrative officer for the Yakama Service Unit, and at the area level as the planning and statistical officer, equal employment officer and special assistant to the area director. In 2005, she assumed the role of director for the Portland Area’s Office of Tribal and Service Unit Operations, where she was responsible for the implementation of the Indian Self-Determination and Education Act and working directly with tribes. Prior to joining the Navajo Area in 2019, she served as the director of the Office of Direct Service and Contracting Tribes at IHS headquarters.

Ms. Tso holds a Bachelor of Arts in interdisciplinary studies from Marylhurst University in Portland, Oregon, and a master’s degree in organizational management from the University of Phoenix in Portland.