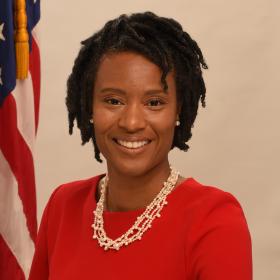 In her current role, Ms. Pace is responsible for advancing the U.S. international health agenda through multilateral and bilateral forums. Reporting directly to the Secretary of Health & Human Services (HHS), she is the Office of Global Affairs’ lead on setting priorities and policies that promote American public health agencies and interests worldwide.

Ms. Pace oversees HHS’ engagement with foreign governments and international institutions as well policymaking bodies such as the G7, G20, United Nations General Assembly (UNGA), and World Health Assembly. Previously, she served as President & Executive Director of Global Health Council (GHC) and was also a member of the Biden-Harris Transition COVID-19 Advisory Board. At GHC, she advocated for increased federal investments in global health, in the face of budget cuts to the U.S. Centers for Disease Control & Prevention, United States Agency for International Development, and World Health Organization (WHO).

Prior to her role at GHC, Ms. Pace spent over a decade working with community-based organizations and grassroots leaders in countries across Africa and Asia on campaigns calling for person-centered access to health. Additionally, she has held positions on various global and regional advisory committees and boards that focus on equity and inclusion. Ms. Pace holds a Bachelor’s degree with Honors in human biology from Stanford University and a Master’s degree in international health & human rights with the distinction of Delta Omega from Johns Hopkins Bloomberg School of Public Health.

Learn more about the Office of Global Affairs.