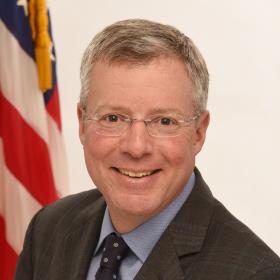 Bob Leavitt serves as Deputy Assistant Secretary of Human Resources and Chief Human Capital Officer for the U.S. Department of Health and Human Services (HHS). Appointed in February 2022, Mr. Leavitt is responsible for the recruitment, development, and retention of the department’s talented workforce in advancing and maintaining the health and safety of the American people. Mr. Leavitt works in partnership with colleagues across HHS and in support of his immediate team in the Office of Human Resources (OHR).

Prior to HHS, Mr. Leavitt led USAID’s Human Resource Transformation from its inception in 2016 through 2021 and served four years as USAID’s Chief Human Capital Officer (2018-2021). The consistent and collaborative implementation of the multi-year strategy and action plan strengthened the Agency’s investment in its global workforce, including a twenty percent increase the Agency’s workforce levels and improved customer service.

Mr. Leavitt has 25 years of experience managing humanitarian and development assistance programs and national security policies. He served as Deputy Assistant Administrator in USAID’s Bureau for Democracy, Conflict, and Humanitarian Assistance (2014-2016) and as USAID’s Executive Secretary and the Administrator’s Senior Advisor for National Security Affairs (2012-2014), which followed his service at the National Security Council as Director of African Affairs (2009-2012). Mr. Leavitt worked a year and a half in Stuttgart, Germany, where he led USAID’s participation in the Department of Defense’s planning and establishment of U.S. Africa Command. He joined USAID in 2001 as a Conflict Resolution specialist and helped develop and implement U.S. Government policies, strategies, and programs in conflict-affected countries in sub-Saharan Africa. Before he joined USAID, Mr. Leavitt lived in Angola, Sudan, Ethiopia, Kenya, and Liberia where he managed humanitarian and development programs for Catholic Relief Services (1994-2000).

Mr. Leavitt has been a member of the Senior Executive Service since 2014 and is a recipient of the 2019 Presidential Meritorious Rank Award. He holds a Master of Advanced Military Arts and Sciences degree from the U.S. Army School of Advanced Military Studies at Fort Leavenworth. He also has a Master of International Affairs from Columbia University’s School of International and Public Affairs and a Bachelor of Arts in International Affairs and English from the University of New Hampshire.