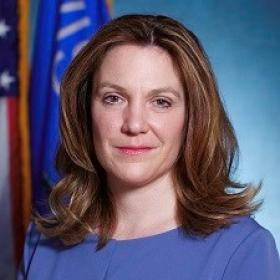 Palm most recently served as Secretary-designee of the Department of Health Services (DHS), overseeing one of the largest state agencies in Wisconsin as a member of Governor Tony Evers' cabinet. In this role, she had responsibility for the state's Medicaid program, its Supplemental Nutrition Assistance Program (SNAP), and behavioral health programs, among others. DHS is also Wisconsin's public health agency, and as such, Palm led the state's response to the COVID-19 pandemic.

Previously, Palm held a number of policy and operational roles in the Obama-Biden Administration at HHS, including Acting Assistant Secretary for Legislation, Counselor, Chief of Staff and Senior Counselor to the Secretary. During her eight-year tenure, she worked on a variety of Administration priorities, including the Affordable Care Act, as well as providing leadership for the Department's work to combat the opioid epidemic.