April 21, 2016
By: Read Holman
Summary:
Each round of Ignite begins with a 3-day Boot Camp. Over the past couple weeks we ran Boot Camps for the 23 teams recently selected into the 5th Round of the Ignite Accelerator. 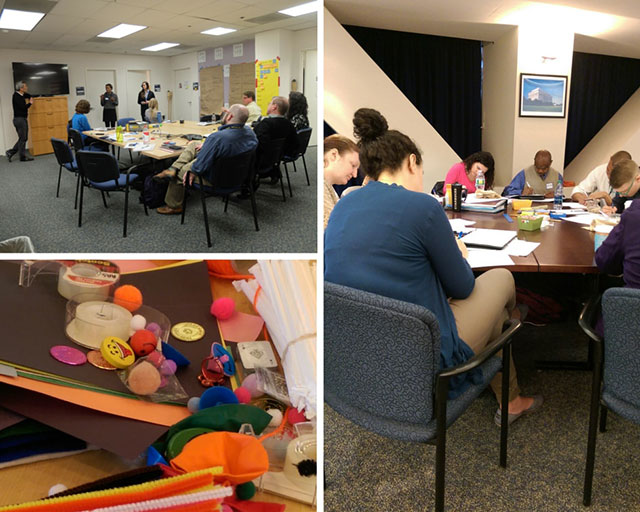 The HHS Ignite Accelerator is our 3-month internal innovation startup program. Department staff compete to get in. They bring a problem worth exploring and the Accelerator program provides the opportunity for them to carve out and test one or more solutions to those pressing challenges.

Each round of Ignite begins with a 3-day Boot Camp. Over the past couple weeks we ran Boot Camps for the 23 teams recently selected into the 5th Round of the Ignite Accelerator.

Over the last year or so we've been working with a number of agencies that are looking at launching their own versions of Ignite. We've been focusing on supporting the efforts at the Health Resources and Services Administration (HRSA), the Centers for Disease Control and Prevention (CDC), and the Civil Rights Division at the Department of Justice. While these agencies have either already or will soon be launching their own innovation accelerator program, there have been many others that have expressed interest. (Not wanting to put the cart before the horse, I won't name them here.)

This blog post can be read generally, but it is written particularly for those other agencies. The goal of this post is to document this part of our journey and serve as a useful starting place for others out there looking to venture in a similar direction.

Teams had to pitch to get in.

In the fall we solicited project ideas from the staff of HHS. We had about 100 initial applications submitted, from which about 50 finalist teams were identified. Starting in December, those Finalist teams received training and support to explore their project idea a bit further. In particular, they were asked to interview their customers to gain a better understanding of the problems and were provided access to IDEA Lab office hours and the network of Ignite alumni. Then in February, all 50 teams pitched to get in. From those pitches, we selected 23 teams. We have much more written up on this blog post which goes over our selection process

(In a fun and visionary parallel program, HRSA ran their own idea incubator program timed to line up with our finalist stage: The 7 HRSA teams selected into their program went through a customer-focused discovery stage. At the end of their 3 months, on their Demo Day, each team pitched for support from their leadership and pitched to get into the HHS Ignite Accelerator.)

Our Boot Camp is partly a training.

The Boot Camp introduces teams to some simple problem solving tools and techniques through lectures and workshops. These tools and techniques go beyond just their particular project and (theoretically) can be used towards any problem they're facing within their office.

But where training begets knowledge, experience begets wisdom. The best way to grasp the concepts is to apply them. The best way to learn how to swim, after some basic lessons, is to get thrown into the deep end. Plus, there's a lot to do! We don't have time to sit in meetings thinking about the right way forward. We must move.

Each team leaves with a very early-version prototype and project plan. Those prototypes and plan may change along the way, and infact pivots (so long as they are supported by customer and stakeholder feedback) are encouraged! But we advocate getting to the testing stage quickly.

Teams mapped out their ecosystem, honed the scope of their project, and created "rough and ready" prototypes (those that take less than an hour to create) of solutions to problems they've identified. The best prototypes are the ones that can be tested with users. For some, this is a simple website mockup. For others, it's a revised process workflow.

We have Coaches and Instructors to support the teams.

If you bring smart people into the same space with enough time work and sufficient tools to work with, amazing things happen. That's one of the basic principles behind any working session, and our Boot Camp is no exception.

We bring 3 types of people together to make our Boot Camp happen: The project teams (of course); they bring the problems and ideas. Lead instructors; they provide the high-level training. And Coaches; they provide individualized guidance to each team.

The teams selected into Ignite.To keep a proper teacher-student ratio, we ran two Boot Camps: Boot Camp ALPHA for half the teams; Boot Camp BRAVO for the other half. Here's a list of the 23 projects in this Round of the Accelerator.

In our experience, larger teams end up spending more time on consensus building and less time moving forward and just trying things out to see what happens. Ignite is a program that requires teams to move quickly and with agility so as to learn as much as possible as fast as possible. So we ask teams to limit the number of attendees per team to 5. We tell them that the optimal team size is probably 3.

We have a contract with faculty at the University of Maryland's Academy for Innovation & Entrepreneurship. They've been running our Boot Camps since we introduced the concept a couple years ago. Each Boot Camp has been different from the one previous, and this Round is no exception. We worked regularly with them over the last few months to design the agenda and approach.

Each team selected into Ignite is assigned an Innovation Coach. Our Coaches are individuals with some design and/or entrepreneurship experience. Many of them are former participants in the Ignite program. All but one is an HHS employee. That one is Daniel Yi of the Department of Justice which is considering launching their own innovation accelerator program. The job of the coach is just that: To coach. They do not provide (too much) subject matter expertise. They do not make decisions for the team. They do not help the team prototype. They guide, poke, ask, nudge, and shine lights on various paths forward. They reinforce over and over again the basic principles of problem identification, gaining customer empathy, and scoping the goals of a project to be more obtainable within the mere 3 months of the program.

It's a mix of lectures, workshops, and more.

Many teams enter the boot camp with a general direction but still a fuzzy idea as to what exactly they're going to do over the 3 months of the Ignite Accelerator. The three days of the Boot Camp offers a huge opportunity to hone in on the particular problem(s) they'd like to solve. ("You can't boil the ocean in only 3 months!").

There are two general methodologies that underlie the Boot Camp curriculum: Design Thinking (PDF) and Lean Startup (PDF). We try to avoid the labels since the core principles underlying the methodologies are so similar, but as a short explainer: These are both problem-solving methodologies used by businesses, small and large, to ensure that products and services are developed in a streamlined manner to meet real human needs.

The agenda is a mix of lectures, workshops, feedback sessions, end-user interviews, and time to just work. Day 1 is more structured. Day 2 slightly less so. And the bulk of Day 3 is for the teams to simply work. You can download the full three-day agenda here (PDF). At the end of this third day, each team reports out, presenting their revised project pitch, prototypes, and goals to the other teams.

An important component of the Boot Camp is that of asking questions. Each team is asked over and over again to explain their project direction and justify their path forward. It's through tough questioning we hope to uncover together the best path forward.

Teams tell us that a primary benefit of the three day Boot Camp is simply the luxury of focusing on their single effort all as a team for a full three days. Beyond the lessons and the access to other innovators from across the Department, simply having the mental space to work uninterrupted provides the opportunity to see things in a deeper light and make true meaningful even transformative progress, rather than simply working through a task list of to-dos through a series of 30 minute meetings.

On the morning of Day 3, the teams found themselves (accidentally) in the elevator with HHS CTO Susannah Fox. She politely introduced herself, asked what they were working on, and then casually hit the button to take them to the 8th floor. An elevator pitch ensued. On an actual elevator. It was one of the new things we threw in this time. And it was so literal that it worked!

What Happens After the Boot Camp?

In the end, teams leave with a refined project direction, a deeper understanding of their stakeholders, and at least one prototype to test.

After the Boot Camp ends, the teams are back in their real world. Over the course of the next 3 months, they will be contributing about 50% of their total time towards their project. Through a series of weekly check-ins with their Coach and monthly check-ins with UMD Instructors, the teams will continue to work with their stakeholders and customers to explore their problem area, iterate on possible solutions, and test them in a meaningful way.

This is all building up for the big pitch! On July 14th, the teams will come back to D.C. to present to the world and to HHS Leadership the fruits of their labor: What they did, why they did it, whether or not it worked, and what they want to do next.

Over the last 4 Rounds, we've seen 48 teams give that pitch for follow-up funding and support. About two-thirds of projects have received support of some kind. We've had one project convince the White House Office of Management and Budget to roll out their effort federal government-wide. Another was recently included in the President's budget. A handful have received support from our HHS Ventures Fund. Some have been integrated into White House-led projects. And so many others have quietly been getting implemented in their home office.

We look forward to seeing what this cohort of projects can accomplish.