December 6, 2018
By: Eric D. Hargan, Deputy Secretary of the Department of Health and Human Services
Summary:
The collaboration between NASA and HHS has so many exciting possibilities for understanding health issues on Earth.

My father was an Air Force veteran of the Korean War and he shared his fascination with planes, NASA and anything to do with space with me. One of my first memories was of watching a rerun with him of Neil Armstrong’s landing on the Moon.

Even though my career has kept me Earth-bound, dealing with health and human services at HHS, I’ve remained fascinated with space. I have no regrets, but, interestingly, my job at HHS occasionally gives me the opportunity to interact with space issues.

Recently, I had the privilege of signing on HHS’s behalf an interagency agreement with NASA, covering cooperation on scientific research that would benefit humanity on Earth and on individuals traveling to the Moon and beyond. The National Institutes of Health already had its own agreement with NASA, but this new interagency agreement is an umbrella arrangement designed to cover the entire Department of Health and Human Services. NIH’s National Center for Advancing Translational Sciences Director Christopher P. Austin, M.D., is leading the collaborative effort, coordinating all the HHS agencies involved. The other agencies besides NIH include the Biomedical Advanced Research and Development Authority (BARDA), the Centers for Disease Control and Prevention, the Food and Drug Administration, and the Administration for Community Living. 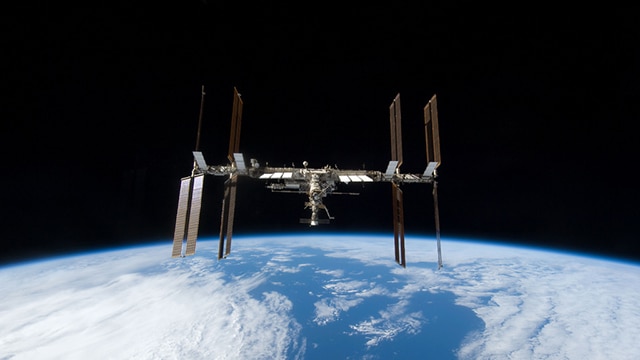 The International Space Station is seen from Space Shuttle Discovery as the two spacecraft begin their relative separation in 2009. Photo: NASA

NIH and NASA have collaborated since the early 1960s. A letter of intent signed last year enables the two agencies to develop a framework for NIH-supported researchers at institutions around the country to gain access to the International Space Station U.S. National Laboratory, as well as Earth-based NASA facilities for biomedical research designed to improve human health on Earth and deal with health risks that people might face during deep space travel. This collaboration will allow us to leverage existing projects and expertise for a potentially greater public health benefit.

NASA is interested in cardiac rhythm problems, inadequate nutrition and food systems, adverse cognitive or behavioral conditions, and the detection and treatment of unknown microbes. NASA and various HHS agencies also have mutual interests in exploring autonomous portable medical capabilities for remote locations and field medical care, long shelf life and manufacturing of pharmaceuticals, and improved tools to deal with isolation and confinement.

Our agencies will sign individual agreements for each new research project. BARDA, for example is collaborating on a project to determine risks associated with space radiation.

This collaboration between NASA and HHS has so many exciting possibilities for understanding health issues on Earth and helping to make deep space travel a reality. As a young boy, I could never have imagined that I would play a small part to support scientists in expanding the boundaries of human health—here on Earth and in space.