September 13, 2018
By: Clarence H. Carter, Director, Office of Family Assistance
Summary:
Circles USA and Open Table aims to boost the social capital of individuals in order to help them work toward self-sufficiency.

Consistent with President Trump’s Executive Order on Reducing Poverty in America by Promoting Opportunity and Economic Mobility, HHS’s Strategic Plan sets goals for HHS to encourage self-sufficiency and personal responsibility, and eliminate barriers to economic opportunity (Objective 3.1) and to support strong families and healthy marriage (Objective 3.3). This blog is part of the Self-Sufficiency Series: Solutions from the Field, which profiles local programs from across the country finding solutions to accomplish these goals.

President Trump’s Executive Order on Reducing Poverty in America by Promoting Opportunity and Economic Mobility and HHS’s strategic plan both promote the value of strong social networks as a way to help people sustainably escape poverty. Simply put: It’s not always what you know, it’s who you know. Many organizations across the country are finding ways to support strong social networks to eliminate barriers to economic opportunity.

For example, the nationwide initiative Circles USA aims to combat poverty through the use of social capital by creating opportunities for vulnerable individuals to form more peer relationships as well as linking them to "allies" in the community that provide new networks of connections to help them overcome barriers to success and economic opportunity.

To eliminate barriers to economic opportunity, as HHS aims to help individuals and communities do, Circles USA describes its model as having three stages: crisis management and stabilization; education and job placement; and retention, advancement and economic stability. The program connects participants, called “Circle leaders,” with trained community volunteers, called “allies,” to create a plan to help participants exit poverty.

These allies support Circle leaders as they move through the stages of self-sufficiency while accomplishing their personal and economic goals. Every month, business, government, education, faith, civic, and philanthropic leaders in the community are invited to hear directly from Circle leaders working their way out of poverty. Additionally, Circles USA uses the data from its network of communities to bring solutions to communities, such as the Cliff Effect Planning Tool, which helps families to identify and address expected loss of government subsidies – sometimes including those funded by HHS – as their income increases.

Across the country, communities are adopting strategies through Circles USA or other organizations aligned with HHS’s goal of encouraging self-sufficiency and personal responsibility. For example, currently, over 70 communities in 20 states and parts of Canada have joined the Circles network. The Circles USA model has also been implemented by organizations such as United Way and Goodwill. Circles has an ambitious plan for expanding to 300 counties by 2026, with the goal of reducing poverty by 10 percent in each of these counties. According to the most recent Circles report, Circles USA leaders have gained income over time, earning on average 39 percent more income after six months, 51 percent more after one year, and 78 percent more after 18 months.

Just as HHS has set a goal to encourage personal responsibility, Circles USA strongly believes families and communities can take charge of their destinies. One participant, Rebecca, said that before joining the initiative she had assumed “some are born on third base, and for me, I was positioned somewhere out in the parking lot at the ‘big game of life.’” Rebecca now believes, however, that “because of the power of Circles in my life, my son’s stories will be told from a much different starting position.” 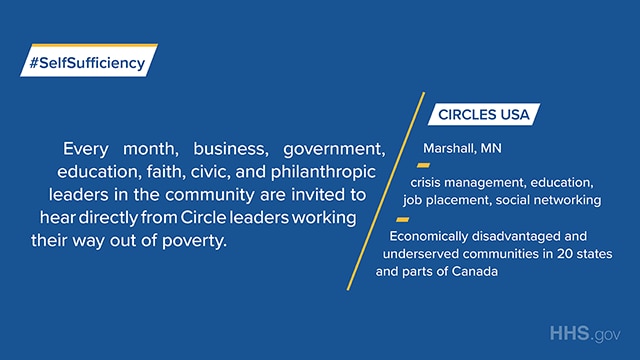 HHS and President Trump’s Executive Order both recognize that the connections, networks and information flows among individuals, organizations and communities – also known as social capital – can strengthen Americans’ economic and social well-being. With a similar mission to Circles USA but with a faith-based approach, the Open Table Model is another example of an effort that aims to boost the social capital of individuals in order to help them work toward self-sufficiency.

Several aspects of the program help families overcome barriers to economic mobility. Each “table” is composed of a group of volunteers who make a year-long commitment to act as a team of life specialists, encouragers and connectors to social capital in the community. Over the course of a year, the intention is for the “table” and the participant or family to develop friendships and together implement a participant-driven plan to build a better life. As the year ends, the “table” transitions into an “after plan,” through which “table” members and the individuals and families they serve work to remain in a supportive community together.

As HHS works to encourage self-sufficiency and personal responsibility, models like Open Table show that communities across the country are already making progress on these goals. Individuals in 28 states and in Europe have been trained on the Open Table model. As Open Table reports, 85 percent of graduates are either in training or have better jobs two years after successfully participating in the “table” process. And 95 percent of “table” participants have long-term relationships with one or more of their former “table” members.

Increasingly, community organizations are using the core model and process to convene human services and other agencies around the unlimited social capital of the broader community. Open Table founder Jon Katov says, “Transforming the poverty in our communities requires us to transform the way we invest in human development[,…]to move from solely transaction-based interventions to the transformational power of relational and social capital.”

HHS has outlined a plan to empower families and individuals to increase their economic independence and productivity. By providing assistance, support and resources, and by establishing programs founded on the foundation of building trust in social supports, countless organizations across the country like Circles USA and Open Table are working each day toward these goals they share with HHS to make it possible for vulnerable populations to develop strong social networks to help them overcome barriers to economic mobility.