Talking face-to-face with the people living through our nation's opioid epidemic teaches that this crisis is unlike any other drug scourge in our history, and that the American people have the hope, courage, and determination to overcome it.

These are the lessons we learned over the course of a two-day swing through Michigan, West Virginia, Maine, and New Hampshire—part of an HHS listening tour on America’s opioid crisis. After wonderful visits in Lansing, Michigan, and Charleston, West Virginia, on the first leg of the trip, the team from HHS and Kellyanne Conway – counselor to President Trump who joined our tour—were eager to begin day two.

On our descent into Augusta, Maine, the Appalachian Mountains looming on the horizon stood as a stark reminder of the immense reach of this crisis. Less than 24 hours earlier, we were admiring that same mountain range in the beautiful state of West Virginia. Like West Virginia, Maine is struggling to stem the tide of overdose death that this epidemic has produced.

But while this is truly a national crisis, the only way to overcome it is with local, homegrown, community-driven solutions. In all four states we visited, the most successful efforts were those that were created and implemented by people with close-knit—and often life-long—connections to the communities they serve.

In Maine, we heard from the founder of MaineWorks, a for-profit temp agency that helps individuals struggling with addiction—many of whom have spent time in jail—find steady work.

Getting and maintaining a full-time job with decent pay is an essential step for individuals in recovery who are trying to rebuild their lives. But there are significant challenges. The first obstacle is finding an employer willing to hire someone with a criminal record. And if you can’t get housing without first having a job, where do you live in the meantime? For someone who has lost everything due to their addiction, starting over often means starting from scratch.

MaineWorks helps individuals in recovery meet these challenges all at once. Its employees are full-time, get regular paychecks, not daily wages, and are eligible for unemployment. MaineWorks helps place its employees into sober-living homes and connect them with a range of community partners that provide free health and social services.

Helping people overcome addiction isn’t simply a matter of finding them a job or providing them medical services, though those are important. Ultimately, it’s about helping them discover a sense of purpose and belonging in this world. As MaineWorks’ founder put it, the opposite of addiction is feeling connection. 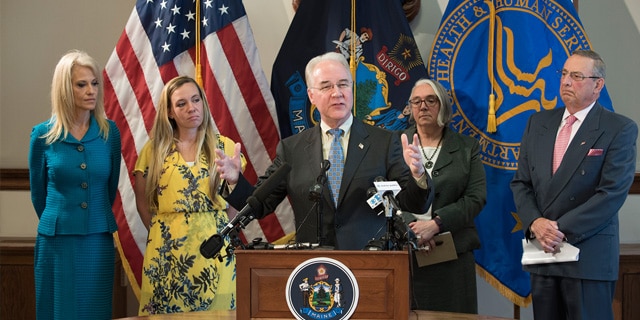 So, the company’s daily ritual of starting each workday by gathering all the employees in the parking lot is about more than just ensuring everyone is prepared to get to their jobs on time: Shoulder-to-shoulder they stand in a circle so everyone can see that they’re not alone, that they’re a part of something bigger and greater than themselves.

We witnessed a similar sense of community in New Hampshire later in the day when we visited the Manchester Central Fire Station. We were there to learn about its Safe Station program, which is receiving national attention for its innovative approach to helping people struggling with opioid addiction get access to treatment and recovery services, including medication-assisted treatment.

Firefighters and first responders are on the front lines of this crisis in part because they are uniquely trained and equipped to administer overdose-reversing drugs. But there’s another reason firefighters and paramedics are at the center of this fight: Everyone trusts them. Even if you don’t know their names, you know you can depend on them to help you—and maybe even save your life—in an emergency.

Next door to the Central Station is a community-based behavioral health treatment facility that specializes in helping people recover from drug addiction. But for a long time, the fire station was the more popular destination for individuals struggling with opioid addiction. The firefighters believed the problem wasn’t that no one knew about the treatment center, or that no one wanted to get clean. The real problem was fear of the unknown.

As so many personal testimonies attest, even for those battling addiction who want to get help, stepping foot in a treatment center or just talking about it with a friend or family member can be scary and overwhelming.

Safe Station helps solve this problem. Rather than just waiting for people to show up when they need a shot of emergency overdose-reversal drugs, Safe Station opens its doors for people who want to get help, but first need to talk to someone they can trust. The program was created by a firefighter who one day found himself counseling a co-worker’s family member who was addicted to opioids and contemplating suicide. All it took to save the man’s life was an invitation to the fire station to talk with someone who would offer the help he needed without the judgment he feared.

Today, over a year later, more than 1,500 Manchester residents have walked into one of the city’s 10 fire stations and said the three words that firefighters live to hear: “I need help.”

The Safe Station program strengthens those informal social bonds that turn strangers into fellow citizens and form the fabric of tight-knit communities. By connecting one person who needs help with another person who wants to help, Safe Station teaches both—and all of us—that there is no common problem we can’t solve by working together.

President Trump is deeply committed to doing whatever it takes to solve this addiction crisis. And he’s assembled a Commission on Combating Drug Addiction and the Opioid Crisis to spearhead the effort.

But the President knows the real problem-solvers are not in Washington, D.C. They’re in Manchester, and Augusta, and in cities, towns, and state capitals all across the country.

So, we’re looking up and down the federal government and asking ourselves what we can do – and what we can do better – to amplify and support the work of the men and women on the front lines of this battle. The only way the federal government can be an effective and capable partner to state and local officials is by first listening to and learning from them. That’s why our listening tour is so important, and it’s why we’re already looking forward to visiting more states in the near future.

On his national listening tour on America’s #opioid crisis, @SecPriceMD made stops in ME and NH. Read his blog → https://go.usa.gov/xNbT6