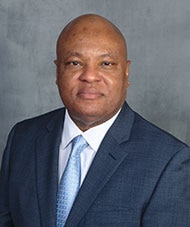 Judge McArthur Allen was appointed Chief Administrative Law Judge for the Office of Medicare Hearings and Appeals in November 2020. In this capacity, he oversees the third level of review for Medicare appeals within the U.S. Department of Health and Human Services and has responsibility for the second largest Federal Administrative Law Judge (ALJ) corps in the United States. Chief Judge Allen brings with him a wealth of legal and leadership experiences, spanning more than two decades.

Chief Judge Allen graduated from Southern Illinois University's School of Law in Carbondale, IL and his legal career began in the insurance defense industry. He then entered private practice in Southern Illinois, where his advocacy centered on criminal law, civil rights, and personal injury litigation. In 2008, he left private practice to join the Department of Defense Global War on Terrorism section as a Deputy Associate General Counsel at the Pentagon. In that position, Chief Judge Allen led and trained a large cadre of attorneys and staff, while exercising control over a large caseload of pending Habeas Corpus litigation matters and advising senior executives and subordinates on procedural and substantive issues involving federal court and compliance litigation.

In October 2018, Chief Judge Allen began his career with the HHS Office of Medicare Hearings and Appeals as an Associate Chief Judge in the Atlanta Field Office. He was instrumental in successfully standing up this new office and creating a fully functional judicial cadre.

Chief Judge Allen is a member of the Illinois State Bar and is licensed to practice before the United States Supreme Court. 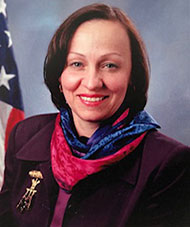 Eileen McDaniel currently serves as the Executive Director for the Office of Management for the Office of Medicare Hearings and Appeals (OMHA) in the Department of Health and Human Services (HHS).  In this role, Ms. McDaniel serves as the Chief Financial Officer and principal advisor to the agency head overseeing budget and financial management, information technology, human capital, and training for OMHA's eleven field offices and headquarters. Ms. McDaniel frequently serves as the senior OMHA representative for meetings hosted by the Office of Secretary HHS, the Office of Management and Budget, the Office of Personnel Management, Congressional oversight committees and stakeholder groups.  Ms. McDaniel led OMHA's $32M Electronic Case Adjudication Processing Environment initiative that transitioned the agency from a paper-based to electronic appeals process, improving the efficiency of operations for OMHA's administrative law judges and legal staff handling the third level of review for Medicare appeals. She also serves as OMHA's Deputy Ethics Counselor, overseeing the agency's ethics program and ensuring compliance with all federal ethics requirements.

Prior to joining OMHA, Ms. McDaniel served as the Associate Commissioner for the Social Security Administration, Office of Disability Adjudication and Review (ODAR), Office of Management.  In this role, Ms. McDaniel provided administrative and management oversight for five headquarters divisions, ten regional offices and one hundred and forty-two hearing offices, in the areas of budget, audit, information technology, physical and systems security, human resources and training for 9,000 employees nationwide.

During her tenure with ODAR, she oversaw the development and implementation of a case processing system, transitioning ODAR to an electronic disability claims process, converting more than 850K cases. She also partnered with the Center for Courtroom Technology at the College of William and Mary in the design and implementation of state of the art electronic hearing rooms that enabled digital recording of hearings and video teleconferencing for ODAR's administrative law corp, the largest in the federal system.

Prior to SSA, Ms. McDaniel worked for the HHS Administration for Children and Families (ACF), Office of Child Support Enforcement as the Deputy Associate Commissioner for Central Office Operations, where she was responsible for working with the Commissioner in implementing the child support enforcement provisions of welfare reform legislation, collective bargaining, strategic planning, and human capital management.  Ms. McDaniel also represented the agency in meetings with the Secretary of HHS, the White House Domestic Policy Council, state child support directors, and national advocacy groups.

Ms. McDaniel holds a Master of Social Work Administration degree from Fordham University, and a Bachelor of Arts degree with honors from Salem State University. 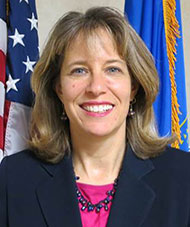 Karen W. Ames is the Executive Director for the Office of Operations for the Office of Medicare Hearings and Appeals (OMHA).  In this position she oversees OMHA's field offices and headquarter divisions responsible for workload assignment, program policy, quality assurance, external audits, and reporting alleged Medicare fraud.  Under Karen's leadership, OMHA drove a 27% reduction in the agency's backlog of appeals by overseeing seven workload initiatives, resulting in more efficient OMHA processes and positive impact for appellants in identifying ways to resolve pending appeals. Karen has led the development of OMHA's case processing manual for operational policy and procedures. She is also responsible for the agency's customer service and public complaint process involving the Administrative Law Judges (ALJ) in which Karen frequently liaises with HHS Office of General Counsel (OGC) on personnel strategy and litigation.

Prior to her work with OMHA, Karen served 20 years at Social Security Administration (SSA).  Achieving various roles of increasing responsibility, she served as Deputy Associate Commissioner in the Office of Civil Rights and Equal Opportunity; Senior Advisor in the Office of Operations; and Senior Advisor in the Appellate Office in the Office of Disability Adjudication and Review.  Notably, Karen provided strategic guidance on implementing program changes to the Disability Case Processing System; assisted in the management and administration of SSA's anti-discrimination program; and worked extensively on labor and employee relations issues at the national level.  She was recognized with a Commissioner's citation for developing and implementing the national business process for handling ALJ bias/misconduct complaints filed by the public as part of the Commissioner's Plan to Eliminate the Backlog and Prevent Its Recurrence.

Karen obtained her Juris Doctorate from Suffolk University Law School and Bachelor of Arts from the University of Vermont.  She is admitted to the U.S. Supreme Court, Commonwealth of Massachusetts, and Connecticut Bars.  In her spare time, she volunteers in her community and with a dog rescue, participates in outdoor activities, and enjoys traveling to US state capitals.