December 22, 2017
By: CDC NCHHSTP
Summary:
New research from the CDC suggests that the recent steep increase in cases of acute hepatitis C virus infection is associated with increases in opioid injection.

Cross-posted from the CDC NCHHSTP Newsroom

New research from the Centers for Disease Control and Prevention (CDC) suggests that the recent steep increase in cases of acute hepatitis C virus infection is associated with increases in opioid injection.

The study examines data from CDC’s hepatitis surveillance system and from the Substance Abuse and Mental Health Services Administration’s (SAMHSA) national database that tracks admissions to substance use disorder treatment facilities in all 50 U.S. states. Across the nation, researchers found substantial, simultaneous increases in acute hepatitis C (133 percent) and admissions for opioid injection (93 percent) from 2004 to 2014. These increases were seen at not only the national level, but also when data were analyzed by state, by age, and by race and ethnicity. Taken together, the findings point to a close relationship between the two troubling trends.

“Hepatitis C is a deadly, common, and often invisible result of America’s opioid crisis,” said Jonathan Mermin, M.D., M.P.H., director of CDC’s National Center for HIV/AIDS, Viral Hepatitis, STD, and TB Prevention. “By testing people who inject drugs for hepatitis C infection, treating those who test positive, and preventing new transmissions, we can mitigate some of the effects of the nation’s devastating opioid crisis and save lives.”

The new analysis, published today in the American Journal of Public Health, builds upon earlier research identifying a similar regional trend in four Appalachian states that faced increasing rates of new hepatitis C virus infection. Hepatitis C is spread through infected blood, which can contain high levels of the virus in a single drop. This, combined with needle and injection equipment sharing behaviors among some people who inject drugs, is fueling infections among younger Americans.

There were also sharp increases among whites and among women. 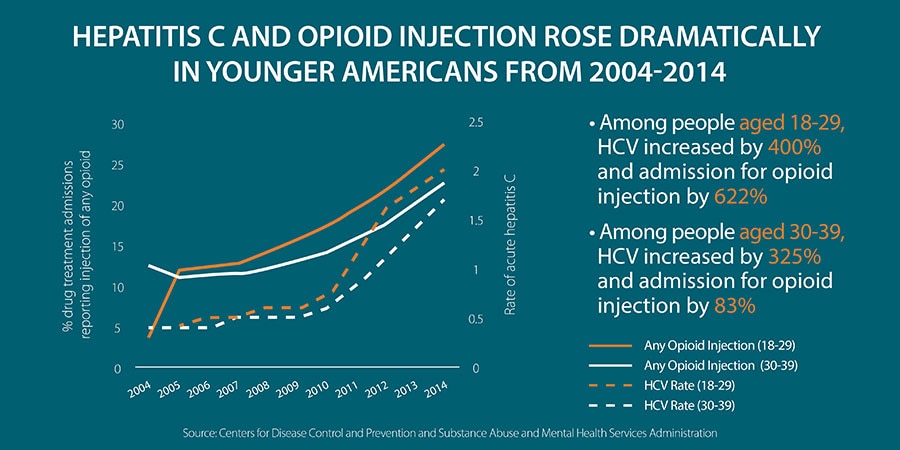 Until recently, hepatitis C primarily affected older generations, but as the opioid crisis worsened, the virus gained a foothold among younger Americans. Most of the 3.5 million people in the United States already living with hepatitis C are baby boomers, born between 1945 and 1965, but the greatest increases in new infections are being seen in young people. And as infections increase among young women, so has the rate of hepatitis C among pregnant women—placing a new generation of Americans at risk.

About 75 percent to 85 percent of newly infected people develop chronic hepatitis C virus infection. As there are few noticeable symptoms, many people are unaware of their infection until serious liver problems or other health complications arise. Hepatitis C is the leading cause of cirrhosis and liver cancer and the most common reason for liver transplantation in the United States.

CDC and SAMHSA work closely with states, communities, and prescribers to prevent opioid misuse, abuse, and overdose and to address hepatitis C risk among people who inject drugs. CDC’s role is to:

To learn more about this analysis, please click here.