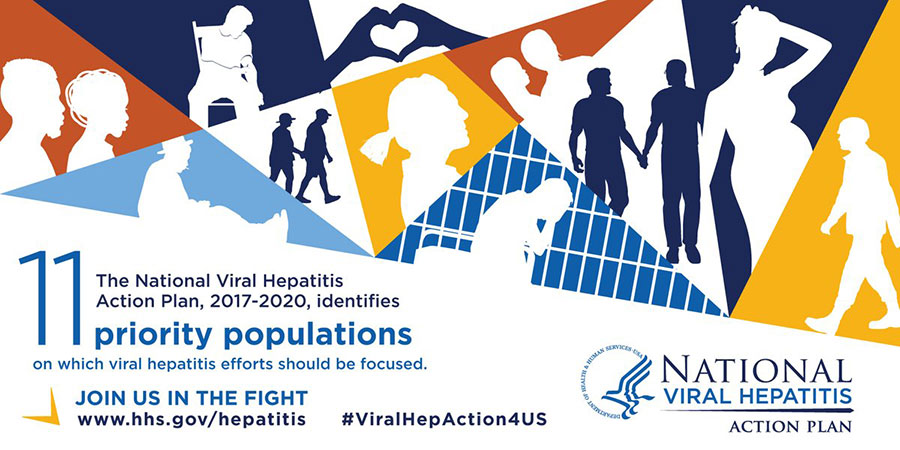 Viral hepatitis affects millions of Americans from every state and from all social, economic, and racial and ethnic groups. However, we know that the hepatitis B virus (HBV) and hepatitis C virus (HCV) disproportionately impact certain populations. These populations include baby boomers, people who inject drugs (PWID), American Indians/Alaska Natives (AI/AN), Asian Americans and Pacific Islanders (AAPIs), African Americans, people in correctional facilities, veterans, homeless individuals, men who have sex with men (MSM) and individuals living with HIV and viral hepatitis coinfection.

In September, we were the co-moderators of two webinars that were sponsored by the Office of HIV/AIDS and Infectious Diseases Policy. These webinars were designed to help increase awareness of these populations that are disproportionately affected by viral hepatitis and encourage organizations working with the priority populations to expand their viral hepatitis efforts. The webinars featured individuals from the 11 priority populations as well as experts working with them. Their remarks helped over three hundred participants further understand the challenges – as well as the opportunities – in reducing viral hepatitis health disparities among these groups.

The fist webinar focused on populations experiencing disparities due to life circumstance and comorbid conditions including:

As a strong partner in implementing the Action Plan, Dr. Matthew Y.C. Lin, Deputy Assistant Secretary for Minority Health, U.S. Department of Health and Human Services gave remarks on the importance of addressing viral hepatitis among all priority populations in order to achieve our shared goals. Ronni Marks, Founder and Executive Director of The Hepatitis C Mentor and Support Group, Inc., in New York City partnered with OHADIP to identify speakers and develop the webinar. Both speakers represent organizations that are vital partners in achieving the goals of the Action Plan.

The first webinar featured incredible stories from speakers from the priority populations including: Knute Neihoff, a Vietnam veteran who was successful cured of hepatitis C infection (watch Knute’s video in this blog); Kailyn Koh and Earl Batte, a provider and a patient who shared their experiences on hepatitis C treatment for homeless people; Matthew Akiyama, MD, who described the challenges of working to help people in correctional facilities; Nicholas Munoz, a gay man living with HIV now cured of hepatitis C; and Sara Alese, a young woman who formerly injected drugs and now works to help others learn about their hepatitis C risks.

During the second priority population webinar, we focused on the following populations:

Dr. Don Wright, Acting Assistant Secretary for Health, provided opening remarks where he discussed his collaboration on the Action Plan and underscored his shared concerns about the infectious disease consequences of the opioid epidemic. He encouraged participants to join with federal efforts and do what they can to strengthen our national response to the opioid epidemic and the fight against viral hepatitis.

These webinars are a unique opportunity to hear compelling personal stories and expert perspectives from members of each priority population as well as learn about some of the innovative work underway in diverse communities across the U.S. to address the disproportionate impact of viral hepatitis in those populations. We hope that the stories and ideas shared will inspire many viewers and participants to take action – by either expanding or strengthening existing efforts or, maybe, even initiating something new.

ICYMI: The #ViralHepAction Priority Population Webinars with personal & expert perspectives on #HepB and #HepC are ready to watch! https://go.usa.gov/xnnNB