June 13, 2016
By: Richard Wolitski, Ph.D., Director, Office of HIV/AIDS and Infectious Disease Policy, U.S. Department of Health and Human Services
Summary:
Men die from hepatitis B and C at higher rates than women. During Men’s Health Week, we can raise awareness and promote viral hepatitis testing, vaccination, and treatment for men.

June 13-18, 2016 is Men’s Health Week, part of Men’s Health Month, which gives us an opportunity to increase awareness of the burden of viral hepatitis experienced by men and encourage testing and follow up care. Viral hepatitis is a leading cause of liver cancer in the United States. The liver cancer death rate is increasing faster than the death rate from all other cancers and it disproportionately impacts men.

Protecting men’s health includes cancer and viral hepatitis prevention efforts. During Hepatitis Awareness Month in May, federal, non-federal, and community partners worked to increase awareness of viral hepatitis and encourage testing and increased access to care. These partnerships are an important part of implementing the national Viral Hepatitis Action Plan.

The Burden of Hepatitis B Among Men

The CDC’s Know Hepatitis B campaign recently updated and enhanced resources for increasing awareness of hepatitis B, particularly among AAPI populations. The campaign includes tools that can be used to encourage men to get tested. These include a video public service announcement, “A Father-Daughter Conversation and Hepatitis B: Are You At Risk?” factsheets, and hepatitis B risk assessments in English and several Asian languages.

The Burden of Hepatitis C Among Men

Regarding hepatitis C, the CDC also reported in 2014 that:

Because 75% of all hepatitis C infections are among baby boomers, the CDC’s Know More Hepatitis campaign includes a variety of materials to encourage baby boomers to get tested. 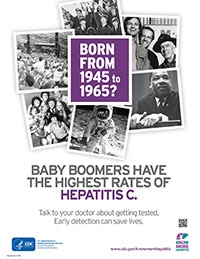 Improving men’s awareness about viral hepatitis can lead to potentially life-saving action such as vaccination, testing, and treatment. These are critical for men’s health and cancer prevention. Here are a few ways to take action this week and moving forward.

Fortunately, there are many options for individuals living with hepatitis. Effective hepatitis B treatments are available and chronic hepatitis C infection is now curable in most cases. Viral hepatitis vaccination and screening for persons at risk are now covered preventive services under most health plans. Working together, we can increase awareness among men and populations at risk, increase testing and improve care. By doing so, we are advancing efforts to achieve the goals of the national Viral Hepatitis Action Plan and move us toward the elimination of viral hepatitis in the United States.

Men are more likely to die from #HepB or #HepC. Men at risk should get tested. #ViralHepAware #MensHealthMonth: http://1.usa.gov/28JTrov