July 31, 2018
By: HHS IDEA Lab
Summary:
Change in government comes slowly and can be difficult. When employees suggest new ways of doing things, people often think, "Yeah, great idea. Now convince someone to approve it." But change does not have to be slow or difficult. That is the point of the HHS Ignite Accelerator.

This blog was originally posted on CDC Connects

It is hardly a secret that federal agencies are not nimble. The cost of changing a policy, procedure, or tool for an entire agency is expensive, requires coordination, training, and logistics, so it is natural for agencies to slow down and decide carefully. Change in government comes slowly and can be difficult. When employees suggest new ways of doing things, people often think, "Yeah, great idea. Now convince someone to approve it."

But change does not have to be slow or difficult. That is the point of the HHS Ignite Accelerator. "We have so many challenges, and we have so many staff who have great ideas," said Sanjay Koyani, the executive director for innovation in the lab's technology office, "but we're kind of a risk-averse agency."

The Ignite Accelerator is an internal innovation startup program for HHS staff. It provides a structure, permission, and encouragement to experiment. Since the IDEA Lab opened several years ago, "We've had hundreds of applications come through," Koyani said. "We've tested this program with more than 80 teams." 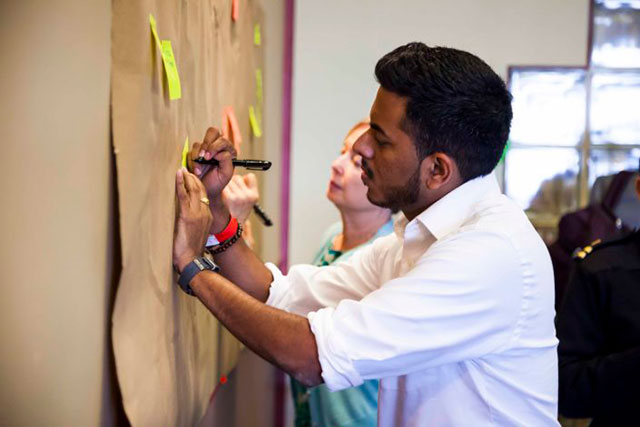 The way it works is that small teams of three to five people submit online applications to the program with ideas for how to improve the way their program, office, or agency works. (However, people who have identified a problem but have not yet identified a solution are also welcome to apply).

If Ignite accepts a team's application, they are invited to Washington for a 3-day boot camp run in cooperation with instructors from the University of Maryland's Academy for Innovation and Entrepreneurship, which focuses on design and entrepreneurship training. After the boot camp, teams get 3 months of coaching and mentorship to further explore their project and test ideas with real users. At the end of the program, teams come away with a clear problem statement, a prototype solution, and get to pitch their solution directly to HHS and agency leaders in an environment resembling the TV show Shark Tank.

The point of all this preparation is to get people to thoroughly test their ideas before they present them to agency leaders. "In most cases, people don't do enough investigation on the front end before we start focusing on solutions," Koyani said.

According to the Ignite website, the goal of each Ignite team during their 3-month program is to validate (or invalidate) the business value of their idea through a series of small but useful tests. The outcome of each Ignite project is usually no more than a prototype that has gone through some sort of beta-testing with actual users-although some projects may go further. At the end, teams pitch leaders for continued funding and political support. It is up to the team to secure this funding for the next phases of their projects. The teams whose ideas show the most promise might find themselves eligible to pitch for support from the HHS Ventures Fund, which is also run from the IDEA Lab. 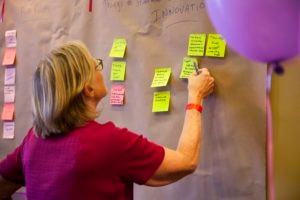 Ignite participants reflect on lessons learned during the bootcamp

Koyani pointed to a simple but successful IDEA Lab project run by a team on behalf of the Indian Health Service in a Phoenix, AZ hospital. The hospital's emergency department was constantly dealing with long lines. "People were leaving and going back home. They would come back in an ambulance and say, 'Sorry, I just couldn't wait.'" The hospital was not triaging patients efficiently. Someone suffering with a possible cardiac condition could end up waiting behind someone with a splinter in their foot. The team tested various solutions, including the possibility of setting up self-service triaging kiosks, something that had worked well at a Johns Hopkins medical facility.

"Several solutions were quickly evaluated and seen not to be the right solutions," Koyani said. What ended up working best was a simple human solution: having a nurse at the door to immediately triage people to different lines. "That worked really well with this population. It's interesting how often some of the simplest solutions can work for some of the most complex-seeming problems."

Apply for the HHS Ignite Accelerator.

Posted In:
Health IT
Tagged: Methodologies Tools and Resources