In addition to fighting off infections, the human immune system also has the capacity to detect and destroy cancer cells lurking in the body. Cancer immunotherapy involves boosting or refining this response to more effectively treat cancer. There have been many advances in this field, but identifying the patients who would most benefit and understanding how to keep the immune system from over-responding are still areas of active research.

Each year, about 60,000 Americans will be diagnosed with kidney cancer, and 92 percent of them will have clear-cell kidney cancer, in which cancer forms in the small tubules of the kidney. Kidney cancer can often be treated successfully with surgery or radiation in its early stages, and the five-year survival rate for all kidney cancers is 71.2 percent. If the cancer spreads to other parts of the body, the prognosis worsens, and there may be a need for more aggressive treatments, such as immunotherapy. However, it’s estimated that less than 20 percent of patients with clear-cell cancer respond to currently available immunotherapies.

Researchers at the National Institutes of Health have developed a novel immunotherapy approach to treat clear-cell kidney cancer by targeting a protein found only in the cancer cells, and are now testing the approach in a clinical trial.

The approach leading to this new clinical trial is built on decades of discovery science led by Rear Adm. Richard Childs, M.D., clinical director at the NIH’s National Heart, Lung, and Blood Institute, chief of the Transplantation Immunology Hematology Branch, and an officer in the U.S. Public Health Service Commissioned Corps. 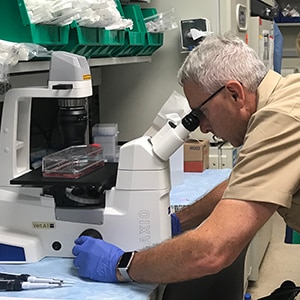 Childs’ early work as an NIH fellow spun off the concept of using a bone marrow transplant to treat leukemia and other blood cancers, where immune cells, called T cells, in the donor’s bone marrow are used to destroy leukemia cells in the patient’s body. He hypothesized that this so-called graft-versus-cancer effect could also be effective for treating patients with kidney cancer that had become metastatic – spreading to other parts of the body.

In a pilot clinical trial, Childs’ group found that half of patients who had not responded to other immunotherapies exhibited a graft-versus-cancer response from an immune cell transplant. However, it was not clear which donor T cells were actually killing the cancer, and the transplant also sometimes led to graft-versus-host disease in which the donor cells attack vital organs.

So, Childs and fellow researchers isolated and grew T cells from the blood of a patient whose cancer had regressed after the transplant. From those T cells, Childs’ team then isolated a novel protein on kidney tumors that the T cells were recognizing. That protein was discovered to be made from a piece of viral DNA that lodged itself into the human genome millions of years ago:  called a human endogenous retrovirus (HERV-E). While all people have the HERV-E gene, this gene is only turned on in kidney cancer cells.

The team has now developed a method to genetically modify a patient’s own T cells, thus avoiding the risk of graft-versus-host disease, to specifically recognize the HERV-E antigen to enhance the T cells’ ability to target and kill kidney tumor cells.

A trial is now underway to determine if this strategy is safe. The trial is recruiting 24 adult patients who have clear-cell kidney cancer and who have not responded to other types of immunotherapy or to drugs known as kinase inhibitors that are designed to interrupt tumor growth. To learn about the trial, including detailed eligibility criteria, visit the NIH Clinical Center website.