Home > Blog > A Survivor and a Responder: Hurricane Florence

A Survivor and a Responder: Hurricane Florence 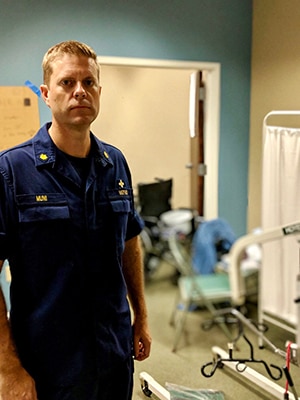 The home that my wife and I purchased the day before we married is about a quarter of a mile from where Hurricane Florence made landfall, and we don’t know what will be left after the storm passes. But what’s even more important to me than our house is helping other people in need. I am currently responding to the hurricane at a shelter co-located with North Carolina responders at a church in High Point, North Carolina, as part of a team from the U.S. Public Health Service Commissioned Corps sent there to provide care after the storm for those in need.

Already we are providing basic medical care for people who evacuated to the shelter. Some of the patients we are seeing are from New Bern, a city just a few counties away from my community. Being here and helping people helps me not think about the possibility of losing our home. My possessions can be replaced; neighbors and loved ones cannot.

My name is Lt. Cmdr. Michael Muni, and I am the chief public information officer for one of our Rapid Deployment Force (RDF) teams. The Commissioned Corps has RDF teams, each with more than 100 officers on call and ready to respond within 12 hours of activation, and several other specialized teams ready to deploy when called. I have been with the United States Public Health Service Commissioned Corps since 2009 and assigned to RDF-2 since 2010.

Before joining the Commissioned Corps, I was an undercover narcotics detective in southeastern North Carolina (directly in the path of Hurricane Florence). I decided it was more effective to stop people from starting to do drugs than stopping people from selling drugs. Now, when I am not responding to disasters, I work at the Health Resources and Services Administration as a senior public health analyst for the Division of Healthy Start and Perinatal Services within the Maternal and Child Health Bureau.

Commissioned Corps officers respond to all types of public health and medical emergencies. When we are called, we are there. One of my most memorable moments as a Commissioned Corps responder was as the chief public information officer for a team providing care in the Monrovia Medical Unit in Monrovia, Liberia, during the Ebola outbreak. Our officers, first-hand, helped patients survive the Ebola virus. I had the special opportunity to interview these survivors and their family members when they were first released, free of the Ebola disease. It was very moving to see people have a second chance at life and it continues to motivate me to serve with the Commissioned Corps.

Now our team is responding to Hurricane Florence. When it comes to hurricanes, like any other situation in life, it is always best to prepare and be proactive. When you already have existing resources in place, you are able to help people quicker. Having previously lived in southeastern North Carolina, I have experienced many hurricanes and witnessed many hurricane survivors. When a hurricane makes landfall, survivors need assistance as soon as possible. Whether thousands of miles away or in my own backyard, being on site to help people survive a disaster is a vital service our nation provides. I am honored to be part of it.