Home > Blog > Fighting the Opioid Crisis Before and After Hours

The U.S. Public Health Service Commissioned Corps: Fighting the Opioid Crisis Before and After Hours

Officers of the U.S. Public Health Service Commissioned Corps take on many different jobs across the federal government, including foreign deployments that deal with life-threatening conditions. But at the end of the day, many of them continue to serve on their own time. Increasingly, they are finding a role to play in fighting the opioid crisis in the communities where they live.

Cmdr. Leo Angelo Gumapas, an engineer working on water systems, and Lt. Cmdr. John Pesce, managing a portfolio of research grants at NIH related to parasite infection, have been spending their off duty hours educating the public about the dangers of opioids and connecting individuals with resources to help prevent addiction.

“We wear the uniform for a reason. We serve our Service and our community. We live in our communities,” Pesce said. “Grab your friends and make a difference.”

Gumapas and Pesce joined several other Commissioned Corps officers and U.S. Surgeon General Jerome M. Adams, M.D., M.P.H., earlier this week to see the traveling opioid memorial “Prescribed to Death,” created by the National Safety Council and hosted by the White House and National Park Service on the Ellipse

Hearing his officers talk about their after-hours opioids fight, Vice Adm. Adams said, “We wear this uniform proudly. Use that respect to educate the community. …There’s an opportunity for everybody to play a part -- talking about opioids in the breakroom, around the dining table, at church. We’ve got to get our colleagues more comfortable talking about it. There’s not an officer, not a person, in this country who can’t play a role.” 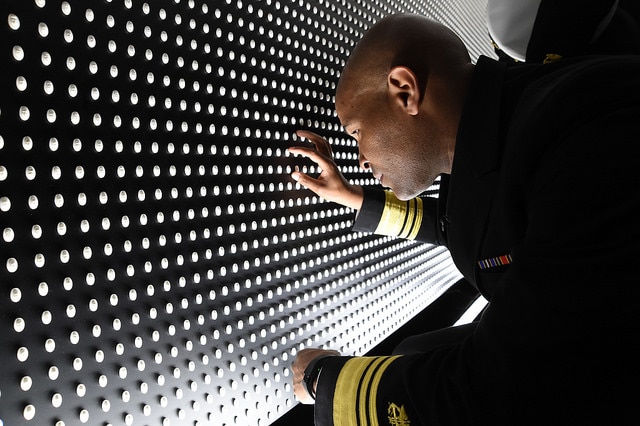 Surgeon General looks at the faces of victims of the wall.

The memorial represents the 22,000 people who died in 2015 from a prescription opioid overdose with a wall covered by 22,000 pills carved with faces of the dead. The Council continues to add names. The memorial is moving this week to Columbus, Ohio, and later to Houston.

Adams noted that the number of opioid overdose deaths has increased dramatically since 2015, and 116 people die every day from opioid-related overdoses.

He urged his officers to get even more involved in the fight against over-prescribing and misuse of opioid pain medications.

The Surgeon General on April 5 issued a public health advisory urging more Americans to carry naloxone in case they encounter someone in the throes of an overdose.

“I wanted my officers to see the memorial. None of us is immune to bias that keeps us from getting better. Seeing those faces helps my officers see how imperative it is to [deal with this crisis],” he said.

The Commissioned Corps, one of the seven uniformed services, is overseen by the Assistant Secretary for Health, with the Surgeon General providing operational command. The 6,500 officers work throughout HHS agencies as well as other federal and state departments and around the world. They provide essential health care services to underserved and vulnerable populations, and are often are deployed in emergencies, including the West Africa Ebola outbreak, the Flint water crisis, and most recently helping the public recover from hurricanes in Texas, Florida and Puerto Rico. 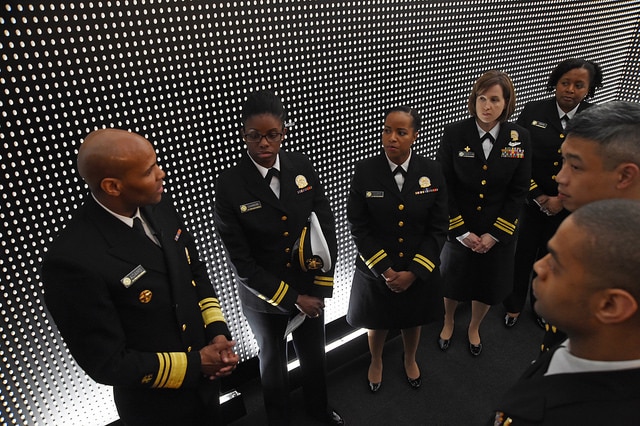 The Surgeon General urged his officers to get even more involved in the fight against over-prescribing and misuse of opioid pain medications.

They specialize in a wide range of disciplines—as doctors, nurses and other public health specialists, including epidemiologists, researchers and physical therapists. “I’m a public health engineer,” Gumapas said at the memorial. Otherwise, I’m just an engineer if I didn’t think about public health.”

Lt. Cmdr. Courtney Gustin, who most recently served as a certified nurse midwife at the Alaska Native Medical Center in Anchorage and also deployed to Guinea in 2015 to work on the Ebola response, said she joined the Commissioned Corps after serving in the Army and Air Force Reserve and then practicing in the private sector because she wanted to serve. “Our end goal is improving the health of the nation. It’s not about making money.”

“The memorial,” she said, “drives it home how many people have been hurt. It’s enlightening and sad to see a person’s life reduced to a pill.”

If you or someone you know has an opioid use disorder, effective treatment is available and recovery is possible. Call the Substance Abuse and Mental Health Services Administration’s National Helpline 1-800-662-HELP (4357) or go to https://www.findtreatment.samhsa.gov/