Home > Blog > Empowering Our Communities on the MLK Day of Service

Empowering Our Communities on the MLK Day of Service

The observance of the Dr. Martin Luther King Jr. holiday on January 15 is a time for us to reflect on the life and achievements of an extraordinary leader in American history.

Dr. King devoted his life to advancing equality, social justice and economic opportunity through service to others. He also linked the quest for equality to healthcare and talked about the importance of being first in moral excellence and generosity. He taught us that everyone has a role to play.

On what would have been Dr. King’s 89th birthday, we can also hold ourselves accountable to acknowledging the work that remains to fulfill his dream. Many will mark the King holiday by volunteering in their neighborhoods – service is a powerful tool for strengthening our communities. Beyond volunteer service, there is much that can be done, for example, to improve the conditions in which all Americans are born, grow, work, live and age.

Overall, we have made considerable progress improving health and healthcare for racial and ethnic minorities and disadvantaged populations since the founding of the HHS Office of Minority Health (OMH) more than 30 years ago. The life expectancy gap between blacks and whites is at its narrowest point over the last three decades; cancer disparities are improving for all minority groups, including Asian-Americans and Pacific Islanders; and teen birth rates have dropped for all races and Hispanic groups.

However, persistent and pervasive health disparities remain and addressing them will require not just a federal response, but also state and local organizations dedicated to achieving health equity. 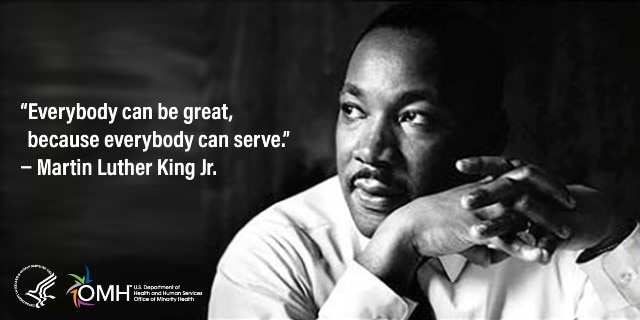 At HHS, we’re also working on three of the most pressing issues facing the nation: the opioid epidemic, childhood obesity and serious mental illness. Every day, 115 Americans die from drug overdoses due to opioids. One in 5 children in the United States is overweight or obese, and the rates are higher among African-American and Latino children. And about 10 million American adults experience serious mental illness affects each year.

At OMH, our new Empowered Communities for a Healthier Nation Initiative is designed to generate community partnerships to help meet these challenges. OMH has awarded grants to 15 organizations across the country that serve communities disproportionately affected by opioids, obesity or serious mental illness, with the goal of expanding the use of actions with the greatest potential impact.

Whether to address these issues or others, throughout the country many of us at HHS and in other federal departments and their communities will participate in the MLK Day of Service on January 15. The holiday remains the only federal holiday observed as a national day of service – a “day on, not a day off.”

Wherever you live, I hope you will join the hundreds of thousands of Americans who will spend the MLK Day of Service volunteering for a good cause or community activity.