I immigrated to the United States from Brazil when I was 13. My dad worked for an American company and was transferred to Washington, D.C. My mother ran a local health clinic and became a manager at George Washington Hospital.

I always knew I wanted to help people. At first, I aimed to become a doctor. But in college I began to learn about the field of public health. Ever since my first biology class, I’ve been fascinated by the impact of HIV/AIDS on society, first from a scientific perspective and after from a cultural and human impact in those highly affected countries.

I loved to travel. After I got my master’s in public health, I worked for the World Health Organization and went to Angola. It was fascinating to bring assistance to where it’s most needed. Conditions were awful: HIV/AIDS was on the rise, and people had to overcome violence and abuse – even land mines – to get help.

We were getting people access to health care during an uncontrolled HIV/AIDS epidemic, when the stigma was really high and people didn’t trust anyone. I never forgot the Angolans’ struggles.

I worked in Afghanistan for a few years, first on a family planning project and later running a research project on private healthcare access. I learned – after several close-call bombings – that there are limits to what I could do in such an insecure environment. The pressures of staying safe became a burden and a barrier to getting work done in communities with the most need.

In 2008, I was glad to rejoin my wife and return home to Washington, D.C., and to find my home base in the global office of the Health Resources and Services Administration at HHS.

I began working with PEPFAR, the President’s Emergency Plan for AIDS Relief, and have been with that program ever since. PEPFAR means to bring the best the government has to offer, by having different agencies work together to help countries most affected by the HIV/AIDS outbreak. Many of these places have the least resources to cope with an epidemic.

With HRSA, I went on assignment to help people get access to HIV treatment in South Africa, Uganda, Nigeria, Tanzania and Botswana. I worked with some of the most vulnerable populations, including transgender people, men who have sex with men and sex workers. 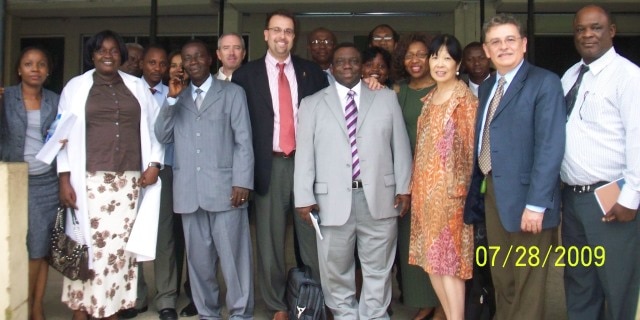 There was slight detour in 2011, when I resigned so my family could move to Nicaragua where my wife was assigned by USAID. There, I continued my work with PEPFAR for the Defense Department, working with the local military. Afterward, we were sent to Guatemala, where I served as the Central American regional PEPFAR coordinator, working in seven countries, supporting the most vulnerable populations affected by HIV/AIDS.  When we eventually returned to the U.S. in 2016, I rejoined HRSA in the HIV/AIDS Bureau and continued to work with the PEPFAR program.

I’m always learning from every assignment I have – in the field and at headquarters. And I’ve learned a lot from how PEPFAR operates.

PEPFAR makes a huge impact – by going where we are needed most, collaborating with host countries, and sharing best practices. HRSA treats its essential partners domestically and internationally the same way. HRSA’s mission is to improve the health of Americans, and it has the same emphasis domestically as PEPFAR does overseas, working with vulnerable populations, rural health, low income, and the need to build the workforce and the health infrastructure.

Whenever I get frustrated with the work, I remember what people living with HIV have to go through on a daily basis, the stigma and discrimination they suffer, and even violence and abuse.  It always put things in perspective and it gives me strength to move forward. I love this work, and I want to continue helping people as much as I can.

I’m Rodrigo Boccanera, a global health worker and a HRSA program officer.  And I am HHS.

Rodrigo is one of more than 79,000 people who make HHS run every day. You can share his story and see others on Twitter and Facebook using #IAmHHS.