I’ve been the HHS Secretary’s photographer for 27 years. Tom Price is the seventh HHS Secretary whose activities I will have covered for the Department.

I grew up in the Petworth neighborhood in Northwest D.C. I became interested in photography as a kid, in a D.C. summer youth program. I shot my first photos with a loaner camera. When I saw my images emerge in the darkroom tray, I knew this was for me. Fortunately, my parents knew it, too. Though it was a major purchase, they bought me the camera I wanted – the Nikon F1. I still have it. I went on to graduate from Duke Ellington School of the Arts and from the Minneapolis College of Art & Design, and to make photography my living.

Photographing inside the government is something special.  I started as a lab photographer, working in the darkroom at the NIH photo lab. After a few years, I moved to the Treasury Department and shooting for Treasury Secretary Nicholas Brady.

I moved to HHS in 1990. By 2001, HHS switched to digital photography and my workflow went from taking hours to develop film, make contact sheets, select photos and make 500 prints for the press office to mail out to a matter of minutes now.

One of my most poignant memories was the morning of September 11, 2001. Then-Secretary Tommy Thompson called me to his office, which was used as a command center for the emergency. A month later, the nation faced the Anthrax attacks, and HHS was on the frontlines of the government’s response to the first bioterrorist attack on the U.S. in the 21st century. Shooting in those situations, I could feel history was being made.

You learn to get the shot and make it count. At this point, I have more of a sense of history. I was there when something important happened and I had to record it properly. 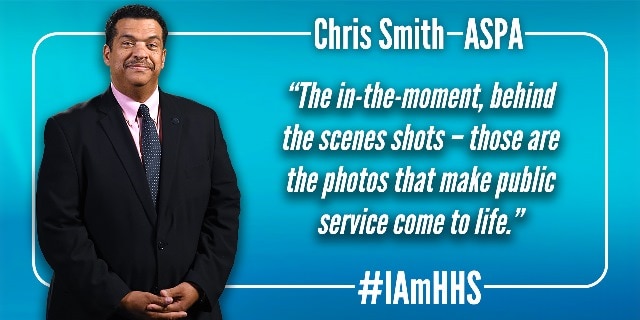 I married my high school sweetheart, and through her, I learned we both had World War II history in common. Both of our fathers were documented, original Tuskegee Airmen, the first black unit of combat aviators in the U.S. Armed Forces. Growing up, I knew only that my father was an aviation cadet, but I didn’t know about his historic role until about eight years ago. I always was proud of my dad, but now I’ve tried to learn as much as I can about the Tuskegee Airmen. On May 8, 2015, the 70th anniversary of V-E Day, it was a thrill to see vintage war-planes flying over Washington, D.C., and to photograph them from the rooftop of the Humphrey Building.

I’m often asked how many images I’ve taken. Well, I have 2.5 terabytes of images stored, representing the last four years. This amounts to about 28,500 images per year and possibly as many as 770,000 images over my 27 years here.

Grip and grins, sitting in meetings, standing at the podium – there’s a place for them, too, but the in-the-moment, behind the scenes shots – those are the photos that make public service come to life.

I’m Chris Smith, I’m a photographer, and I am HHS.

Chris is one of more than 79,000 people who make HHS run every day. You can share his story and see others on Twitter and Facebook using #IAmHHS.