Home > Blog > Faces of Sickle Cell: Include Us in Clinical Trials

Faces of Sickle Cell: Include Us in Clinical Trials

They ranged in age from 15 to 61—four African-Americans, all with stories to tell about their struggles with sickle cell disease, all with stories about a common experience that helped them through those struggles: participating in clinical trials.

The panelists, who had joined trials funded by NIH, spoke to a standing-room-only session at the Annual Sickle Cell Disease Clinical Research Meeting, hosted in August by NIH’s National Heart, Lung, Blood Institute, Division of Blood Diseases and Resources.

More than 100,000 people in the United States and millions more worldwide have sickle cell disease, an inherited, often life-threatening blood disorder that mainly affects African-Americans, Hispanics and Asians. Yet fewer than 10 percent of U.S. clinical trial participants come from these populations. Indeed, Hispanics—17 percent of the U.S. population and the second group most affected by sickle cell—make up just 1 percent of trial participants.

“The studies are delayed and our ability to test hypotheses is severely limited,” she said. But the research community, she added, must play a key role in finding ways to increase participation.

NIH funds clinical trials in institutions throughout the country, but poverty, geographic proximity, lack of knowledge about and trust in research, as well as  language barriers can all challenge diversity in recruitment for studies.

At the meeting, Ann Farrell, M.D., director of the FDA Division of Hematology Products, discussed the agency’s work with the research community to develop methods to refine its approach to the conduct of trials to provide the best analysis of treatment for diverse populations.

But the trial participants at the session had suggestions of their own.

First, get creative with recruitment, they said. Shirley Miller, 61, the spokesperson for the FDA’s Year of Diversity in Clinical Trials Campaign, called for using current study participants to recruit others. “They are going to believe them better than someone who doesn’t experience the pain,” she said.

Second, build trust by talking about the research in detail. “When I consider participating in a trial, I want you [the researchers] to be transparent about successes and failures, so the patient knows what to expect,” said Jennifer Nsenkyire, 44, who in 2009 received an experimental bone marrow transplant that transformed her life.

“Explain how I can stop my participation in the middle of the study, and what happens if I have a bad reaction to the treatment tested,” she said at the conference. “Can I receive lifetime care for that or would I be on my own? I want to understand the benefits to me and to future generations, and the risks involved.”

It is common to hear that minorities mistrust researchers. According to Sherrie Flynt Wallington, Ph.D., assistant professor of oncology at Georgetown University Medical Center, the mistrust is not about past abuses – such as the infamous Tuskegee study in which black men were not given effective treatment against syphilis in order to study the progression of the disease – but about how patients and their communities are treated by researchers today.

The answer, Wallington said, is engaging the community in the research. She encouraged researchers to report back to the communities with study results and to develop lay audience materials.

“At the core of all community-engaged research is the understanding that the community will be involved in a meaningful way,” Wallington said.

Explaining with candor the multi-layered benefits of the research—that it is for the greater good, not just for the individual patient—is part of building that trust, one patient said.

Francine Baker, who joined her daughter Jasmin, a15-year-old living with sickle cell disease and an advocate, put it best: “Giving back is rewarding. Having my children participate in clinical trials has been rewarding for them as well, and they have learned so much about their disease.”

And with that, Jasmin offered a rousing sendoff message for researchers. “Thank you!” she said. “Even if you don’t see change, there is change. Don’t give up!” 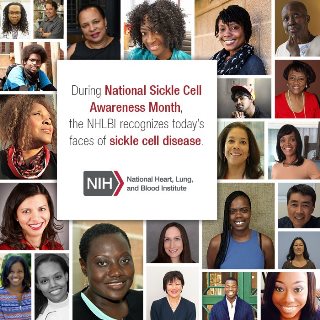