August 8, 2017
By: Tara Sealy, Microbiologist, Viral Special Pathogens Branch, Centers for Disease Prevention and Control
Summary:
Tara Sealy is a microbiologist at the CDC trying to develop new tests that diagnose Ebola. She is one of the more than 79,000 people who make HHS run every day.

I’m a microbiologist and I work with viral hemorrhagic fevers such as the Ebola and Marburg viruses. I also work with bats, which are considered the most likely—though unproven as yet—reservoir of Ebola.

As far back as I can remember, I’ve always been fascinated with science. As a little girl I wanted to be a paleontologist because I loved dinosaurs. Then I saw the movie “Outbreak” and read “The Hot Zone,” which traces an outbreak of the Ebola virus in monkeys at a facility in Reston, Virginia, in the late 1980s, and I became fascinated with diseases.

I ended up going to school near the CDC Fort Collins facility and got a job as an undergrad. I got my undergraduate degree in microbiology, went to work fulltime for CDC and eventually earned a masters at the London School of Hygiene and Tropical Medicine, University of London.

One of the most interesting things about my job is I get to travel the world on bat-trapping adventures. We trap bats at night in caves. Sometimes we come across a python eating a bat and we’re like “you can just have that bat” and we move on.

Although they most likely are carriers of the deadly Ebola virus, bats don’t usually get sick. They get a bad rap. They are actually quite cute and docile. But we’re trying to figure out what the reservoir host is for Ebola and how the virus is transmitted from an animal to a human. 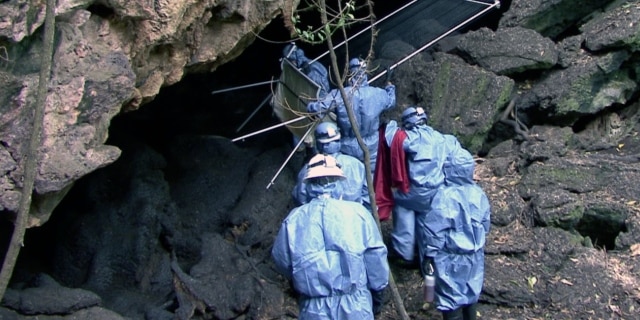 Tara and her team enter a python cave.

I’ve deployed with five CDC Ebola lab teams to Guinea and Sierra Leone, heading up the first and only, so far, all-woman team to test blood samples of potentially infected patients. Rapid testing is crucial because it allows us to get people with Ebola into early treatment as well as to determine when survivors become virus free and may be released from isolation.

At CDC in Atlanta, I work in a biosafety level 4 lab, which is reserved for the most deadly pathogens. I know what I’m doing and I try to be as careful as I can.

My son Eli was only 16 months old when I left for West Africa the first time. He’s now 4 years old and I just gave birth to our second son, Evan. My husband, a software developer, deserves a medal. It is difficult to leave them, and one day, I hope I can share my stories with my children and that they will understand why I sometimes have to be away.

I love my job because science changes every day. I learn something new every day. I get to travel the world; I get to meet new people; and I get to impact public health. I’ve seen how Ebola can destroy families and devastate communities. CDC protects America’s health, safety and security. What I do to support this goal is to help develop new tests that diagnose Ebola and other viral hemorrhagic fevers.

I’m Tara Sealy. I work for CDC and I am HHS.

Tara is one of more than 79,000 people who make HHS run every day. You can share her story and see others on Twitter and Facebook using #IAmHHS.

Find out how this @CDCgov employee is working with bats and deadly viruses help to protect #publichealth https://go.usa.gov/xRy29 #IAMHHS