Native Americans Walk to the Four Corners to Fight Diabetes

May 10, 2017
By: Judy Sarasohn, HHS (Public Affairs)
Summary:
American Indians left their western tribal communities on foot to gather at the Four Corners Monument in an effort to raise awareness of health disparities. 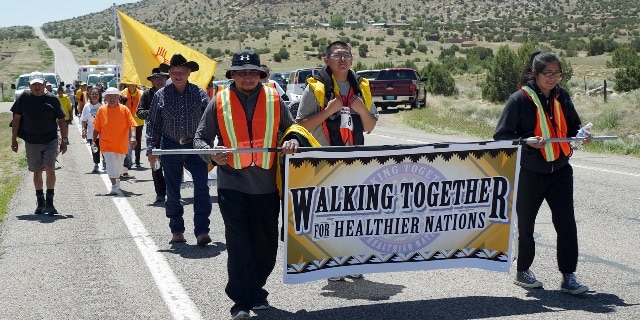 Hundreds of American Indians left their western tribal communities early in the morning on Friday, May 5th, on a journey that would take them to Four Corners. They walked as many as 20 miles to meet up at the Four Corners Monument to promote their people’s health and well-being.

The walkers represented the Navajo, the Ute, the Zuni and other Tribes, and walked in from New Mexico, Arizona, Utah and Colorado to gather where those states share a common boundary—the only place in the United States where four states meet. This was the 21st annual Walking Together for Healthier Nations event, co-sponsored by Navajo Area Indian Health Service (IHS) facilities—the Shiprock Service Unit, Four Corners Regional Health Center, and the Northern Navajo Medical Center—as well as the Ute Mountain Ute, Southern Ute and White Mesa tribal communities.

The purpose of the annual walk is to raise awareness of the health disparities and challenges that Native people face, particularly with diabetes. Rita King, a Ute Mountain Ute member and coordinator for the Sleeping Ute Diabetes Prevention program at the IHS facility in Towaoc, Colorado, said 11 percent of her Tribe suffers from either type 1 or type 2 diabetes.

The Tribe, she said, promotes exercise, good nutrition and other preventive actions including community activities like the Walking Together event to fight diabetes. “Walking is free. It’s good to get out, meet old friends, make new ones,” King said.

According to the Centers for Disease Control and Prevention and IHS, Native Americans have a greater chance of diabetes and kidney failure resulting from diabetes than any other U.S. racial or ethnic group. But the CDC also reported recently that kidney failure among Native Americans dropped by 54 percent between 1996 and 2013, the fastest rate for any racial or ethnic group in the U.S.

This hard-fought progress in reducing kidney failure has happened since the IHS began using population health and team-based approaches to diabetes and kidney care, according to the CDC and IHS. 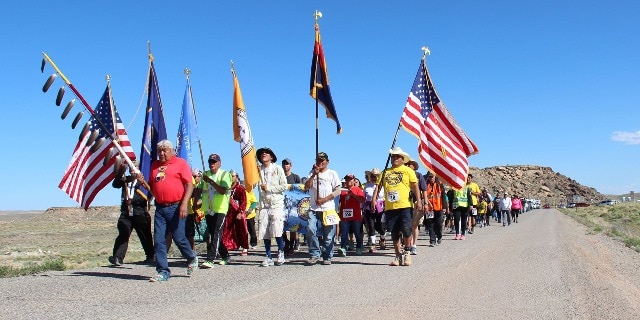 “If we can start now educating the young people, we can beat this diabetes,” added Kenny Frost, a Southern Ute from Ignacio, Colorado, who carried a staff of eagle feathers representing all the Tribes. He said traditional blessings for the gathering at Four Corners.

That they could tie in health awareness with their cultural and traditional ways was important. “Walking with the Tribes into the park and going around the monument was great,” Frost said, noting that the Utes were welcomed into the monument area by a group of Navajo veterans. “When we do something like this, it’s a part of history.”

Kenny James, a Navajo from Shiprock, New Mexico, said walking is an important and enjoyable way to stay healthy. “I do a lot of hiking. I like to participate with a group.” He’s 62 and said he did all 19 miles of his group’s route. A veteran of the Marines and state and reservation law enforcement, James said this was his second year on Walking Together. He wore the wrong shoes last year and suffered from blisters; this year he wore light hiking shoes and had no problems. 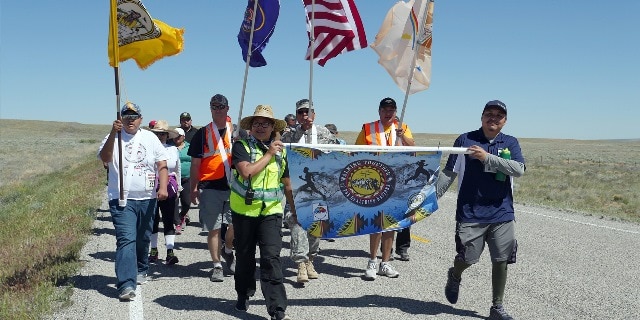 Roberta Diswood, a recreation specialist with Shiprock Health Promotion at Northern Navajo Medical Center, agreed that the walk promotes good health and well-being. She coordinated a group of about 100 Navajo and some non-Native people who made the 21-mile journey from northwest New Mexico to Four Corners.

Harold Cuthair, 56, chairman of the Ute Mountain Ute Tribe, also participated in the walk and said he encourages tribal leaders, staff and the community to participate in healthy activities. “Health is a priority in our lives and [important] today, tomorrow and in the future. … [O]ne thing my heart, soul and mind tell me is anything is possible. I walked all the way!”

Participating in healthy activities doesn’t end with the great walk, stressed Eli Bigthumb, a Navajo and a recreation specialist for the Crownpoint Service Unit who coordinated a group of 88 Navajo walkers for a related event on May 3rd. Ten walked the entire 27-mile route from Pueblo Pintado to Torreon, New Mexico. Bigthumb said, “This is a kickoff point for our spring and summer season.”