April 3, 2017
By: Judy Sarasohn, HHS (Public Affairs)
Summary:
Both opioid addiction and suicide are serious preventable and treatable public health problems, and everyone has a role to play. 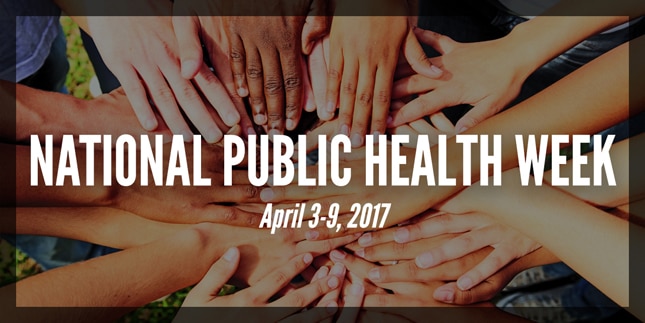 During National Public Health Week, April 3-9, we celebrate the progress we’ve made helping people live healthier lives and those public health professionals who have helped us make that progress. But one hallmark of public health is life expectancy, and the United States just experienced a drop in overall life expectancy for the first time since 1993. This was due in part to increases in two of the nation’s most heart-breaking and yet preventable public health issues facing us: the increasing rate of suicide and the increasing misuse of opioid drugs.

Geographic disparities may also be associated with limited access to mental health care and greater social isolation, as well as the “opioid overdose epidemic,” according to the CDC report.

According to the CDC report: “Communities can benefit from implementing policies, programs and practices based on the best available evidence regarding suicide prevention and key risk factors.” And the National Suicide Prevention Lifeline, 1-800-273 TALK (8255), supported by the Substance Abuse and Mental Health Services Administration (SAMHSA), is always available for anyone in need of help or information about suicide prevention.

Opioids include both prescription medications, such as hydrocodone, oxydone, morphine and methadone, which are approved to manage pain, as well as illicit drugs, such as heroin.

Suicide and opioid misuse and abuse risk factors can overlap, including pain, other addictions, mental disorders and disruptions in social support. Whether opioid overdose is unintentional or intentional, more than 300,000 Americans have died since 2000, including more than 33,000 deaths involving prescription and illicit opioids in 2015 alone.

To address this crisis, President Trump recently established a Commission on Combating Drug Addiction and the Opioid Crisis, which has been tasked to make recommendations to the President for improving the federal response to the opioid crisis. The commission includes heads of key Cabinet departments, including HHS Secretary Tom Price.

The National Action Alliance for Suicide Prevention and the Surgeon General’s Report on Alcohol, Drugs and Health provide roadmaps for comprehensive public health approaches to suicide and substance abuse prevention. The emotional and economic impact on individuals as well as on families and communities demand a continued proactive and coordinated response.

Both opioid addiction and suicide are serious preventable and treatable public health problems, and everyone has a role to play. Learn about some of the available resources for treatment options, mental health and behavioral health issues and related concerns:

During #NPHW, we recognize the work that remains to address #opioid addiction & suicide. They are preventable. https://go.usa.gov/xXRBB