Climate change poses current and increasing threats to human health. As the climate continues to warm, the risks to human health will grow, exacerbating existing health threats and creating new public health challenges. Many disadvantaged communities currently bear the brunt of climate-induced risks from extreme heat, poor air quality, flooding, extreme weather events, and vector borne diseases. While the impacts of climate change will be felt by all Americans, they will be deeper and longer lasting among the poor, people of color and other populations.

While all Americans are at risk, some populations are more likely to suffer ill effects from exposures related to climate change, including:

Climate change can worsen existing differences in health, making it an important health equity issue. The effects of climate change add to other longstanding differences among people that result in different health outcomes for communities in the United States. These differences include exposures to pollution, poor living conditions, racism and other forms of discrimination, and psychological stresses.

Climate change is increasing the severity or frequency of health threats that are already occurring in some areas.  In other areas, climate change and its impacts on the land, water, and air quality can cause new health problems where they hadn't previously occurred. 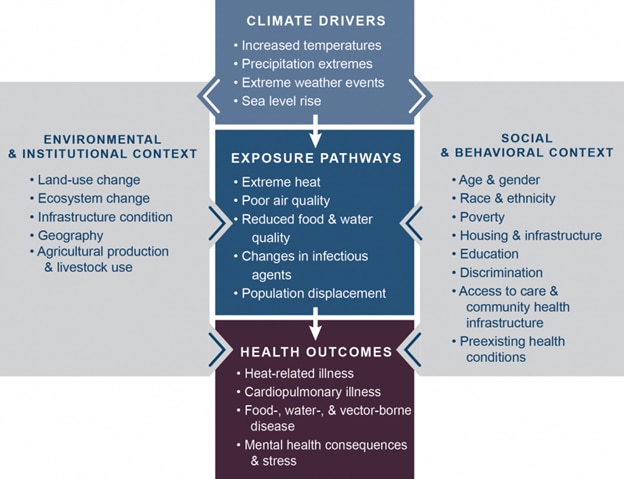 This figure shows how climate change affects human health. Climate change is increasing temperatures, causing sea level to rise, and increasing the strength of storms and the risks of both flooding and drought. These changes in turn lead to people being exposed to different threats to their health, including extreme heat, contaminated food or water, poor air quality, and changes in the distribution or infectivity of disease-causing insects. These different exposure pathways are influenced by other factors that interact to affect health outcomes (gray side boxes). Key factors that influence vulnerability for individuals are shown in the right box and include social determinants of health and behavioral choices. Key factors that influence vulnerability at larger scales, such as natural and built environments, governance and management, and institutions, are shown in the left box. All of these influencing factors can affect the vulnerability of an individual or a community through changes in exposure, sensitivity, or adaptive capacity.