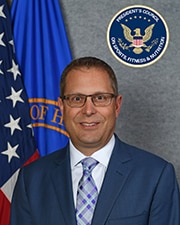 Trevor Drinkwater was appointed to serve as member of the President’s Council on Sports, Fitness & Nutrition.  Mr. Drinkwater is the Founder and CEO of Inclusion Companies LLC. Drinkwater started his career with Nestle Waters nearly 30 years ago as a sales representative and became the youngest ever General Manager of the company before he turned 30 years of age.

After Nestle Waters, Trevor joined Warner Bros Home Entertainment as its Senior Vice President of Sales, where he helped the company launch the highly successful DVD format. He then joined Take Two Interactive for a short stint as its COO before deciding to leave to become an Entrepreneur.

Mr. Drinkwater has Executive Produced more than 10 films including the critically acclaimed film, “The Way” and soon to be released, “The Public.” He recently founded Inclusion Companies LLC, which provides consulting and sales services for companies seeking to amplify their corporate responsibility initiatives with a specific focus on diversity and inclusion.

Mr. Drinkwater received his undergraduate degree at the University of Colorado, Boulder, with a major in marketing and a minor in economics. He also completed the Executive Finance Program at the Wharton School of Business.  He has been happily married for 19 years to Kristi Drinkwater and they have two children: Dylan Louise Drinkwater and Paxton Joseph Drinkwater.