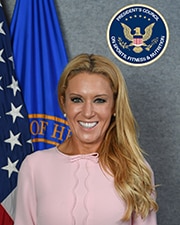 Natalie Gulbis was appointed to serve as a member of the President’s Council on Sports, Fitness & Nutrition.  Born of Latvian descent in Sacramento, California, Natalie Gulbis began playing golf at the age of four. She credits her parents and longtime coach Butch Harmon for influencing her career the most. By the time she was seven she had won her first tournament, and by the age of ten she was shooting under par on a regular basis.

Natalie played her first LPGA event as a 14 year old while attending Granite Bay High School, where she was the number one player on the boy’s golf team. She graduated at 16 before attending the University of Arizona on a golf scholarship. She left college at 18 to chase her dream of becoming a professional golfer. Eighteen years later, she still loves playing on tour. Natalie won her first event in France at the 2007 Evian Masters, but her favorite golf memories are from playing on three victorious U.S. Solheim Cup teams.

Her hobbies include fitness, cooking, and playing games. In 2005, she created the Natalie Gulbis Foundation, which benefits several charities including a Boys & Girls Club named after her in Nevada. Natalie Gulbis is married to Josh Rodarmel, a former Yale quarterback and serial entrepreneur. They reside in Newport Beach, California.