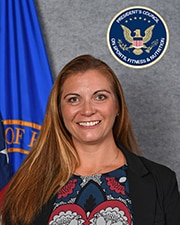 Misty May-Treanor was appointed to serve as Co-Chair of the President’s Council on Sports, Fitness & Nutrition.  With three Olympic Gold Medals (Athens, 2004; Beijing, 2008; and London, 2012), combined with 109 career tournament victories, Misty is considered the greatest beach volleyball player in the history of the sport.

Misty’s performance in the 2012 Olympic Games in London, England captured the hearts of fans from all around the world. After many believed she couldn’t recover from a serious injury/surgery incurred from her appearance on TV’s Dancing With The Stars just three years prior, Misty showed her resolve, work ethic, and commitment in retaining her standing as the greatest athlete in her sport with her third consecutive Olympic Gold Medal in London.

Above and beyond Misty’s achievements in her sport, she takes great personal pride in being an outstanding role model and making an impact with each opportunity she can. Misty spreads goodwill through her work with Special Olympics, Make-A-Wish Foundation and her own educational/clinic curriculum, as well as many other causes and initiatives important to her. Additionally, as one of the most respected major corporate brand spokespersons, Misty enjoys impactful corporate brand partnerships with a variety of leading companies.

Misty has dominated every level of the sport of volleyball, both as an indoor volleyball Champion (two California State Championships at Newport Harbor High School, 1991-1995 and one NCAA Division 1 Championship at Long Beach State, 1998) in addition to securing her position as the most decorated athlete in beach volleyball history.

Looking back, it’s no surprise that this Long Beach, California native became a professional athlete.  Misty grew up playing beach volleyball at the Santa Monica Pier with her parents, 1968 volleyball Olympian, Butch May and Barbara May, a nationally ranked tennis player.  In her adult life, Misty is married to Major League Baseball catcher, Matt Treanor.