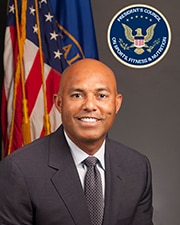 Mariano Rivera was appointed to serve as Co-Chair of the President’s Council on Sports, Fitness & Nutrition.  Mr. Rivera was born in Panama City, Panama, and grew up with one older sister, and two younger brothers. The family lived in Puerto Caimito, a Panamanian fishing village, and were supported by his father’s job as captain of a fishing boat. As a young man, Rivera played soccer and baseball with his friends on the beach during low tide. Without the means to buy baseball equipment for games, they substituted cardboard milk cartons for gloves, tree branches for bats, and fashioned balls by taping worn-out baseballs and wads of shredded fishing nets. Rivera used this makeshift equipment until his father bought him his first leather glove when he was 12 years old.

Rivera was signed by the Yankees organization in Panama in 1990, and debuted in the major leagues in 1995. Initially a starting pitcher, he was converted to a relief pitcher late in his rookie year. After a breakthrough season in 1996 as a setup man, he became the Yankees’ closer in 1997. In the following seasons, he established himself as one of baseball’s top relievers, leading the major leagues in saves in 1999, 2001, and 2004. He was a key contributor to the Yankees’ success in the late 1990s and early 2000s. An accomplished postseason performer, he is regarded within baseball as one of the most dominant relievers in major league history. He was named the 1999 World Series Most Valuable Player (MVP) and the 2003 American League (AL) Championship Series MVP, and he holds several postseason records, including lowest earned run average (ERA) (0.70) and most saves (42). In 2013, the Yankees retired his uniform number 42; he was the last major league player to wear the number full-time, following its league-wide retirement in honor of Jackie Robinson. He is considered to be a strong candidate for the Baseball Hall of Fame once he is eligible.

Rivera has been involved in philanthropic causes and the Christian community throughout his career.  With his organization, Mariano Rivera Foundation, he plans to dedicate his retirement years to continue helping others.

From his best-selling book, The Closer, with Wayne Coffey, to his heart-warming speeches, Rivera inspires readers and audiences with his life story as one of the top-five Yankees of all time, the championships, the bosses, the rivalries, his struggles of being a Latino baseball player in the United States, and of maintaining Christian values in professional athletics. He discusses his drive to win, the secrets behind his legendary composure, and what it's like to run up to that mound with the game—or the season—squarely on his shoulders.