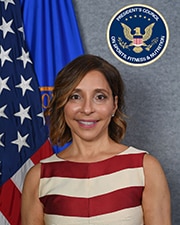 Linda Yaccarino was appointed to serve as a member of the President’s Council on Sports, Fitness & Nutrition.  Yaccarino is Chairman, Advertising and Partnerships, at NBCUniversal, where she oversees all market strategy and advertising revenue for the company, totaling nearly $10 billion every year.

Since joining the company in 2011, Yaccarino has transformed NBCUniversal’s entire advertising business. Her groundbreaking “one portfolio” plan combined the company’s broadcast, cable, and digital assets—a model that has since been emulated by competitors and become the industry standard. She also led its digital transition, and solidified its status as a technology-driven content company by pioneering a suite of cutting-edge data, analytics, and consumer targeting tools. Today, as Chairman, Yaccarino leads a 1,500+ person organization with responsibility for all sales, marketing, and operations—and is currently helping orchestrate the integration of Sky’s international properties into the NBCUniversal portfolio.

Known as an innovator and a catalyst for change, Yaccarino has been recognized as a thought leader in the vanguard of the media industry. She has been profiled in The New York Times and other major publications, and has spoken at numerous advertising industry and international business community events, offering her perspective on how companies can best leverage the sweeping changes affecting the macroeconomic landscape. Through it all, Linda has been a staunch advocate for effective partnership, among and across industries. In 2017, she organized the first “State of the Industry Forum” to convene top decision-makers from across the industry for a provocative dialogue about the current state of the media and advertising business. In 2019, she helped engineer and unveil a game-changing, decade-long partnership with the LA2028 Olympics, transforming how brands can participate in the Olympic Games.

Throughout her 25-year career, Yaccarino has helped multiple organizations navigate increasingly competitive and disruptive circumstances and find sustainable, winning strategies. Prior to joining NBCUniversal, Yaccarino served as Executive Vice President and COO of Turner Entertainment Advertising Sales, Marketing, and Acquisitions, where she helped elevate Turner to a premium position in the marketplace.

Among her many industry honors, Yaccarino was recently inducted into the Broadcast and Cable Hall of Fame. Yaccarino has been named one of the “Ten Most Powerful Women in TV” by Adweek, and as a “CEO of Tomorrow” by Business Week. She has been at the top of The Adweek 50 Power List, named a “Power Women of New York” by Variety, and been considered one of The Hollywood Reporter’s “Women in Entertainment: Power 100” multiple years in a row. In 2017, she received the UJA Foundation’s Mac Dane Award for Humanitarian Excellence.

Yaccarino serves on the board of Ascena Retail Group, inc. (Nasdaq: ASNA), as Chair of the Compensation and Stock Incentive Committee. She also serves on the boards of the Ad Council, Young Audiences New York (YANY), The Female Quotient, and the ACLD. She’s actively involved with her alma mater, Penn State University, where she is on the Dean's Advancement Council in the College of Communications.

Linda’s love of sports started in her childhood when her parents encouraged Linda and her sisters to be engaged in various sports. In her role at NBCUniversal, she has worked on iconic sporting events like the Olympics, the World Cup, and the Super Bowl, as well as with athletes and leaders across many of the major professional sports. As a graduate of Penn State, she’s also a diehard fan of the Nittany Lions.