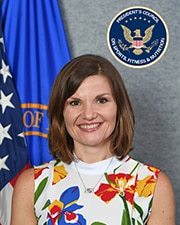 Julie Teer was appointed to serve as a member of the President’s Council on Sports, Fitness & Nutrition.  Teer is a highly respected leader with more than 20 years of diversified experience and expertise in nonprofit and national political fundraising, communications, and government relations. As part of the chief executive management team, Teer serves as Chief Development & Public Affairs Officer for Boys & Girls Clubs of America (BGCA). It is the mission of BGCA to enable all young people, especially those who need us most, to reach their full potential as productive, caring, responsible citizens.

At BGCA, Teer oversees a team of more than 125 professionals responsible for the national organization’s corporate, foundation, and individual fundraising as well as resource development services to local Clubs. In addition, Teer leads the organization’s federal and state government relations and advocacy efforts through the strategic development of BGCA’s advocacy and public policy platforms, thought leadership strategy, and public-private partnerships. Her role also includes directing board development for BGCA’s National Board of Governors and National Trustees. In 2017, Teer led the organization in raising nearly $300 million in public and private sector funding.

Prior to joining BGCA, Teer served as Vice President of Development for Susan G. Komen for the Cure. As a key member of the leadership team, she created and led a highly successful development program and contributed to strategic revenue decisions. Before entering the nonprofit sector, Teer established herself as a top leading advisor, communications strategist, and fundraiser for national political leaders. Teer was Press Secretary, Political Director, and Deputy National Finance Director for Governor Mitt Romney’s presidential bid. As a result of Teer’s work, Romney’s campaign set a record for fundraising in the GOP Primary, raising more than $80 million. She ran President George W. Bush’s 2004 re-election campaign in the battleground state of New Hampshire, which garnered 60,000 more votes than in the 2000 general election. Teer also served as senior advisor for the U.S. Senate Republican leadership and both campaigns of U.S. Senator John E. Sununu. A graduate of the University of Michigan, Teer began her career as the youngest press secretary in the U.S. Senate at the age of 24 for U.S. Senator Spencer Abraham.