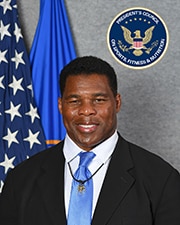 Walker has a long history of commitment to exercise and fitness. During his high school years, he led both his football and track team to state championships. In 1980, Walker participated in the Academy of Achievement program as valedictorian of his class. In 1981, he became the first Academy of Achievement honor student to return to the annual program as a recipient of the Golden Plate Award.

Walker’s collegiate football career is legendary. As a freshman at the University of Georgia, Walker’s performance helped capture the 1980 national football title. He earned consensus All-American honors three consecutive years in both football and track & field, set numerous NCAA and SEC records and capped a sensational college career by earning, in his junior year, the 1982 Heisman Trophy. In 1983, Walker gave up his final year of collegiate eligibility and turned professional. During his 15 year pro football career, Walker set the still standing, single-season, pro football rushing record of 2,411 yards; lead the NFL in rushing; gained more total yards than anyone in professional football history; and received numerous all-pro and pro Bowl honors. Additionally, Walker held a world record in the 60-yard dash, participated in the 1992 Winter Olympics 2-man United States bobsled team, is a fifth degree black belt in Tae Kwon Do. In 2002, he was voted into the Collegiate Football Hall of Fame and in 2015 was selected as the greatest player in college football in the last half century.

In September 2009, Herschel was signed to compete in Mixed Marital Arts (MMA) with Strikeforce (now UFC) to compete in their heavyweight division. Walker trained at the American Kickboxing Academy in San Jose, California. In his first MMA debut on January 30, 2010, Herschel defeated his opponent by technical knockout. On January 29, 2011, he also defeated his second opponent by technical knockout.

Throughout his career, Walker has established a reputation for honesty and diligence, a sincere commitment to the community, and an unsurpassed passion for excellence. He has applied these same successful principles to his food business, established in 2002. Through Walker’s leadership, and personal commitment, his brands have become rapidly growing food service lines to major hotel chains, the United States military, various schools, and retail chains and concessions organizations. Recognized by his customers for excellence, RMFS was recognized by SYSCO Corporation as a “Top 100 Supplier” for every year since 2004, achieving “Silver Status” (Top 40) in 2009. RMFS was awarded the “Silver Heritage Diversity Award” in 2004, the “Bronze Diversity Award” in 2005, and the Gold Diversity award in June, 2013.

Herschel also visits military bases every month in conjunction with the Patriot Support Program developed along with Universal Health Services, Inc., the nation’s largest behavioral health hospital. The program is dedicated to our nation's military service men and women and help in areas of behavioral health. In addition to his corporate schedule, Herschel has competed on The Apprentice and also competed on The Food Network’s Rachael vs. Guy: Celebrity Cook-Off which he won. In 2017, Herschel was inducted into the International Sports Hall of Fame and was also honored with the Doak Walker Legends Award.

Walker is also known for his presentations and speeches, where he shares inspiring leadership lessons he has learned about teamwork, goal setting, perseverance, initiative, preparation, discipline, and overcoming obstacles.

Herschel is excited to serve on the President’s Council on Sports Fitness and Nutrition, as he has been a long supporter and advocate of promoting active lifestyles every day for our youth and adults. For the past 18 consecutive years, Herschel has served as the Chairman of the National Health Through Fitness Day activities, which brings hundreds of advocates to Capitol Hill to meet with members of Congress and discuss the importance of physical activities and physical education.