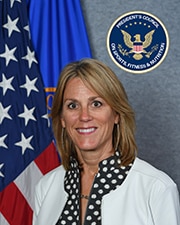 Brenda Becker was appointed to serve as member of the President’s Council on Sports, Fitness & Nutrition.  This Council focuses on educating Americans and leading outreach and awareness efforts to improve the health and fitness of the American people.

Ms. Becker is Senior Vice President, Global Government Affairs for Boston Scientific.  She is responsible for managing the company’s global government affairs team, as well as corporate public policy.  Brenda brings an outstanding track record of success to Boston Scientific with more than 30 years of governmental experience.  Prior to this role, she served in the Bush Administration for 6 years.  She held the position as Assistant to Vice President Cheney for Legislative Affairs.  She was responsible for advising the Vice President of the United States and senior White House staff on legislative strategy in the House and Senate.  Brenda served as the Vice President’s liaison on Capitol Hill with members of Congress and the leadership team.