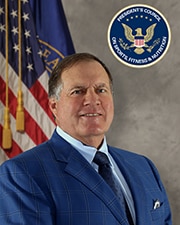 Bill Belichick was appointed to serve as member of the President’s Council on Sports, Fitness & Nutrition.  Belichick, the only head coach in history to win six Super Bowls, grew up in Annapolis, Maryland, in the shadows of the United States Naval Academy.  He attended Phillips Academy in Andover, Massachusetts, before enrolling at Wesleyan University, where he was a member of the football, lacrosse, and squash teams.

Coach Belichick is in his 44th season as a National Football League coach.  He worked as an assistant for the Baltimore Colts, Detroit Lions, Denver Broncos, and New York Giants before being named head coach of the Cleveland Browns in 1991.  Most notably as an assistant coach, he won two Super Bowls as defensive coordinator for the New York Giants.

In 2000, he became head coach of the New England Patriots and is currently in his 19th season at the Patriots’ helm.

Belichick enters 2018 with the most wins among all active coaches and is currently third all-time with 278 total victories as head coach.  His 28 postseason wins is the most by a head coach in NFL history.  In 2007, Coach Belichick led the Patriots to the NFL’s first 16-0 regular season.

In 2017, Belichick won the division title for the ninth consecutive season and won his eighth conference championship as a head coach, extending his NFL record in both categories.

Coach Belichick’s Patriots teams have redefined the words teamwork and consistency and, operating in a league structure designed for equality, have established an unparalleled level of sustained excellence.